Michael Vick Improving Against The Blitz

Despite public perception that he can't, Michael Vick is slowly getting better at beating the blitz. Are teams better off not blitzing him?

Share All sharing options for: Michael Vick Improving Against The Blitz

There is no doubt that right now the biggest topic surrounding the Eagles is the play of Michael Vick.

Even though he has led his team to 3 wins in their first 5 games, Vick has still been under some pretty intense criticism since the season began. The last second comebacks- which yes, were only needed in some games because of Vick's play prior to the 4th quarter- have silenced some, but not all of his critics.

The majority of fans and analysts still point to 2 flaws they see in Vick's game- turnovers and trouble with recognizing the blitz. While criticizing Vick's fumbles and interceptions are fair, the perception that Vick has continued to have major problems with the blitz just isn't true.

Since having trouble with the blitz in the 1st 3 games of the season, Vick has been making teams pay for bringing extra defenders at him.

Against the Browns, Ravens, and Cardinals, Vick was blitzed a combined 53 times. On those 53 plays, Vick completed only 18 passes while being sacked 6 times. His combined quarterback rating against the blitz in those 3 games was a poor 77.6. His failure to move protection to pick up a blitz against Arizona caused him to fumble the ball, which the Cardinals returned for a touchdown.

Following the Arizona game, the plan to stop Vick and this offense was pretty clear- blitz, blitz, blitz. In fact, this season Vick has been blitzed 87 times- almost 3 times as much as Tom Brady (29). Teams have continued to blitz Vick and the Eagles, but the results have started to turn in the Eagles favor.

On Sunday night against the New York Giants 2 weeks ago, Vick was blitzed 16 times. On those 12 plays, he completed 8 passes for 125 yards and his only touchdown of the night. This past Sunday against the Steelers, Vick faced even more pressure. Pittsburgh brought an extra defender 18 times, and Vick torched them for 2 touchdowns and 123 yards when they did. His 131 quarterback vs the Steelers was the best quarterback rating he has had this season against the blitz.

Combined, Vick is 19 of 28 for 248 yards, 3 touchdowns and 4 sacks in his last 2 games against the blitz. Keep in mind this was also against a pretty good Giants defense and a great defensive coordinator in Pittsburgh's Dick LeBeau. In fact, the 3 TD's Vick has thrown against the blitz over the past 2 games have been his only touchdowns.

How has Vick stacked up against other starting quarterbacks against the blitz?

If you compare Vick's numbers to some of the best quarterbacks in the game- Tom Brady, Aaron Rodgers, Eli Manning and Matt Ryan- his numbers are not as good, but not far behind.

Again, the numbers for the other QB's are better- but Vick has not been the train wreck many people believe against the blitz. He has been sacked, but not at a considerably greater rate than the other quarterbacks when you take into account the number of times he's been blitzed. He also has not thrown an interception- something Rodgers and Manning cannot say.

In fact, over the past 2 weeks, Vick's numbers have been right on par with the rest of those quarterbacks. Yes it is a small sample size, but it is a definite step in the right direction.

Recognizing the blitz and beating it does not always have to be done by making sure there are enough blockers to pick up everyone. If you know what is coming and the hot read- and have a quarterback who will stand in and take a hit- you can really make teams pay because of how many defenders they send at the quarterback.

Here is a closer look at how Vick beat the Steelers blitz for 2 touchdowns on Sunday. 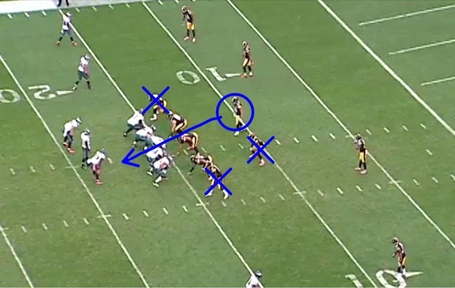 Above: The Steelers have 6 defenders coming, and have assigned LB Larry Foote to LeSean McCoy. Before the snap, Celek motions over and hits one of the blitzers- giving Vick a few extra seconds in the pocket. 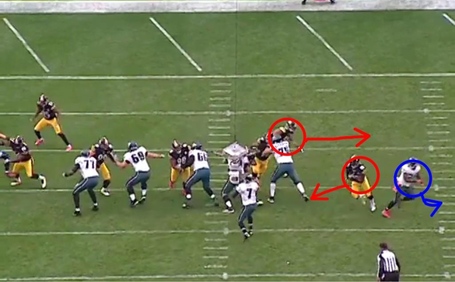 Above: Vick knows the blitz is coming, and as soon as the ball is snapped, he looks to McCoy. Vick knows that Foote isn't going to be able to catch up to McCoy- his hot read on the play. Vick also knows that because McCoy is going out, a blitzer is coming free and he has to get rid of the ball quick. We all know how the play ended- McCoy open in space and turning it into a touchdown. 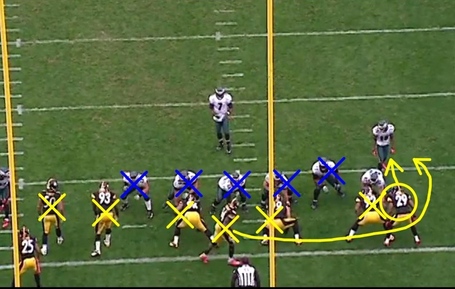 Above: This is the touchdown that gave the Eagles the lead. The Steelers try to get Vick the same way the Arizona Cardinals did- by putting a blitzer on the line and giving him a free shot at Vick. They try to confuse Vick by moving him around before the snap. As Vick prepares to snap the ball the blitzer settles on the side. One again the Steelers are bringing 6 defenders, while the Eagles only have 5 blockers. DeSean Jackson and Brent Celek are both going out on routes. 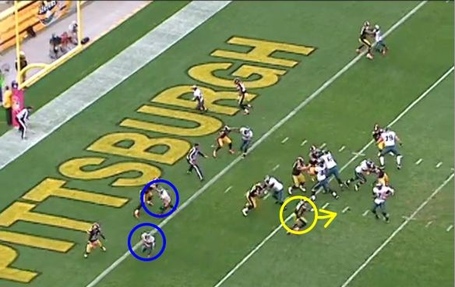 Above: Vick knows that a man is coming free- like on the first touchdown- but also knows because of that he has single coverage on the goal line. Right away he is looking at Celek knowing he'll be open. 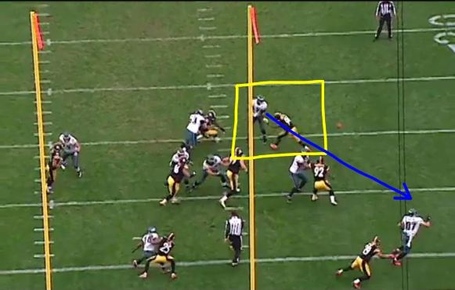 Above: People kill Vick for taking hits that he doesn't have to, but it's also plays like this where his willingness to get beat up helps the team. Vick stands in there- knowing he is going to get nailed- and delivers a perfect throw. The fact that Danny Watkins got beat doesn't help. Vick gets sandwiched by 2 defenders right after he makes the throw. It's a throw right on the money, and it gives the Eagles the lead.

Vick's confidence can hurt this team at times, but it can also really help them against the blitz. If Vick is confident in what he sees, and teams keep sending extra defenders, the Eagles are going to kill teams with the speed it has. If Vick beats the blitz and gets players like McCoy open in space, this offense could really start to improve.

Now, the fact that it has to be noted that Vick can now do something as simple as use his hot reads shows how poor he was early in the season against the blitz. Is he perfect now? No, but the improvement is there.

Vick's improvement against the blitz could cause teams to start playing the Eagles differently. With Vick now showing he can use his hot reads to burn them, teams might be better off not blitzing.

All of Vick's interceptions this year have come when teams did not blitz, but either got pressure generically or had plenty of men in coverage. Vick has shown this season- especially early on- that the real times he makes bad decisions is when he is flushed out of the pocket by natural pressure. It is then that Vick tries to save a play with a bad decision instead of just throw it away.

Against the Detroit Lions this weekend- a team that has blitzed on roughly 30% of the passing plays it has defended- it will be interesting to see if they bring extra men or hope their defensive line can create the pressure.

In an ironic twist of fate, the Eagles and Vick might be hoping that they do blitz.- and isn't that a far cry from how the season started?