Eagles Vs Giants: The Game In Gifs

Share All sharing options for: Eagles Vs Giants: The Game In Gifs

Last night's game started off in style as none other than Brian Dawkins surprised the crowd by coming out of the tunnel with his familiar "wild man" routine. The fans went absolutely nuts, the team was pumped up and Dawkins looked like he was perfectly capable of suiting up and playing.

While the defense came out breathing fire to start the game, the offense didn't do a whole lot. Porous offensive line play and an inspired Giants defensive line conspired to limit LeSean McCoy to just 2 yards in the first half. But his one big run was something to see.

So nasty was McCoy's juke there that Kenny Phillips actually sprained his knee on the play and didn't return.

On what would end up being the Eagles final drive of the 1st half, the offense starting moving and the drive was capped off with a 19 yard TD pass to DeSean Jackson.

You can't quite see the fantastic route run by DeSean Jackson here, but he completely shook Corey Webster and Prince Amukumara to get himself wide open and make this a pretty easy throw for Vick.

Also in the first half, is that a helmet or the front grill of a Chevy Silverado? 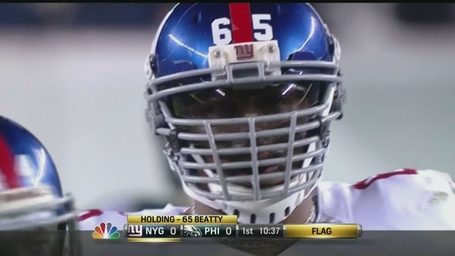 Oh and perhaps you noticed he got a holding flag on that play? And what a hold it was. It doesn't take the real refs to call this one.

Now on the Eagles side, they were doing what they could to stop the rush also... whether they meant to or not. Antrel Rolle is coming free and looks like he's going to get a clean shot on Michael Vick, but Demetress Bell just happens to put his foot out and Rolle trips and falls flat on his face.

As we move to the 2nd half, the Eagles offense started to move the ball and LeSean McCoy got rolling. In case you were wondering whether LeSean McCoy's twitter handle is @cutondime25, this should sum it up.

Let's fast forward to the end of the game where things got a little nuts. The Giants were on the 26 yard line and set for a 44 yard field goal that would have won the game. However, rather than just run the ball or stay conservative, the Giants or maybe more specifically Eli Manning decided to go for broke and throw to Ramses Barden in the end zone. Only Barden was blanketed by Nnamdi Asomugha, so potentially in an effort to prevent an interception, Barden just mugged Nnamdi and drew a pass interference that pushed the Giants back 10 yards.

And that brings us to the field goal. Let's just walk through that nerve shredding final moments. Lawrence Tynes lined up for a 54 yard FG and missed it wide right!

Only, unbeknownst to us this happened.

Yeah, Andy tried to ice the kicker and therefore negated a missed field goal that would have won the game. Needless to say he was probably feeling a bit embarrassed.

So the Giants line up to do it all over again. Tynes hits it dead on this time and it's going, going and....

And Eli was sad.

Meanwhile on the other sideline... Andy Reid is relieved.