Share All sharing options for: In-Depth Evaluations of Rodgers-Cromartie and Jason Babin

We have to applaud the front office for the job they have done so far. I felt that just receiving Cromartie for Kolb would not have been fair value and wanted a second rounder thrown in and the Eagles got it. I also thought it was a good idea to get Babin for a short term answer since Graham is our LDE of the future and the Eagles got him too. These two acquisitions made a lot of sense. The Eagles got two top-notch players on two of the weakest positions on the team. Rodgers-Cromartie and Babin will be huge difference makers on this defense, which is still a work in progress. I’m going to evaluate both players and show what each of them will bring to the field.

Among cornerbacks, he had one of the fastest 40s ever let alone that year, highest vertical, longest broad jump, fastest 3 cone, and fastest 60 yd shuttle. His 17 bench presses were also among the top ten. The guy is physically gifted.

Continued after the jump…

-        Tall, well-built frame with long arms, thick thighs and calves. Tight abdomen and a frame that can carry additional bulk(which he added).

-        Can generate a strong jolt at the line to reroute receivers and knows how to stay on the hip of receivers throughout their routes.

-        Smooth turning on the ball due to above average hip flexibility. Transitions with no wasted motion

-        Very effective in press coverage but when he spends too much time attacking his man, he does not anticipate the quarterback’s moves.

-        Adequate tackler but does a poor job in wrapping up

This pre-draft scouting report is right on the money as DRC shows those qualities in the pros. With the Cardinals, he played press, off, man, zone and did it comfortably. He was also not limited to one side as he played on both. Reid said he will play on the right side so it looks like the Eagles will be sticking to their philosophy of keeping the two starting corners on each side of the field. His balls skills are excellent. He has 13 INTs and 61 pass deflections in 48 career games. After securing an INT, he knows what to do with it as he has taken four them to the house.

The stats show that DRC doesn’t give up a high percentage of completions but when completed it’s for high yardage. He only had a high amount of missed tackles in 2010. Prior to that, he’s been decent and the added bulk should help in the future. He had 50 tackles in 2009 with just 6 misses. He gave up a lot of touchdowns so far but if he keeps it at 4 or under like he did last season, it's fine. As for interceptions, with the amount of pressure our D-line will generate and with Asante on the other side, expect career highs in INTs.  It’s well documented that DRC had a poor year in 2010 after a promising pro-bowl year in 2009. I think a lot of that can be attributed to the team struggling as a whole. They lost two star players in Antrel Rolle and Karlos Dansby to free agency which didn’t help. Safeties Kerry Rhodes and Adrian Wilson had poor years as well. Their pass rush also fell off quite a bit. They registered 43 sacks in 2009 but only 33 in 2010.

All of that is part of the reason DRC had a down year but make no mistake, his talent and potential are through the roof. As of right now, he is still light years better than Patterson and Hobbs. It’s only his fourth year and his best football is ahead of him. Nnamdi didn’t break out until his 4th year. With well experienced Johnny Lynn coaching the cornerbacks and Castillo as well(Watch Castillo run this DB drill at the combine, courtesy of our own JimmyK), Cromartie will blossom into one of the top cornerbacks in the NFL.

Okay, let's take a break and enjoy some of his highlights. 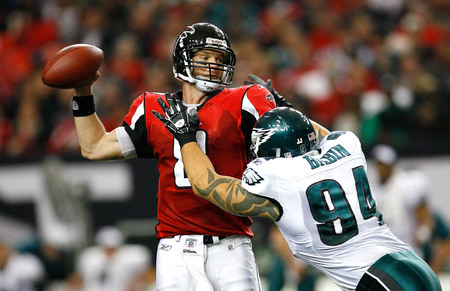 I don’t have the list to rank him among DEs that year but I assure you his numbers are excellent. A 4.62 forty from a 260 pounder is amazing and so is that 4.14 short shuttle.

Scouting Report from Scouts Inc. (Note: This is after Houston put him at 3-4 OLB in his rookie year)

Babin has good speed, quickness and a nonstop motor. He has some functional strength and flashes the ability to stack and hold the point of attack. He is relentless in pursuit and chases down plenty of plays from the back side. He is a strong tackler. He relies on speed and quickness as a pass rusher. He has an explosive first step off the edge and can bend and close on quarterbacks. He has the active hands to reduce his blocking surface and the quickness to get on the edge of a blocker. But Babin lacks ideal power, athleticism and technique. He has struggled in his conversion from a college defensive end. He often has seemed uncertain when reacting to blocking patterns. He struggles to set the edge against outside runs. He has trouble disengaging from blocks. He has limited pass-rush countermoves and needs more refinement. He is a straight-line coverage player who has marginal lateral quickness and change-of-direction skills. He doesn't play with a lot of awareness or recognition in zones. He may benefit quite a bit moving from 3-4 OLB back to 4-3 DE.

I bet most of you didn’t know that after Babin was drafted, Dom Capers(who was head coach then) miscast him at OLB his rookie and sophomore year before he was fired in 2005.  Babin still held his own with 63 tackles and 4 sacks in his first year(16 starts) and 35 tackles and 4 sacks in 12 games(3 starts) his sophomore year. In 2006, the Texans switched to the 4-3 and drafted Mario Williams first overall. Babin was back to his natural end position but split time with Antwan Peek. In limited amount of snaps, he registered 26 tackles and 5 sacks. Still pretty good for a rotational guy. After that, he bounced around from the Seahawks, Chiefs and the Eagles where he was either buried in the depth chart and not given enough playing time or used in the wrong system. So even though he’s 31, he doesn’t have a lot of tread on the tires. In 2010, he finally came to the right system that was taught by the best defensive line coach in the league, Jim Washburn. Washburn utilized Babin’s speed, quickness and explosiveness out of his wide 9 set.

Let’s take a look at the advanced stats and compare him to three of the best left defensive ends in the NFL.

As you can see, Babin’s production is equal to or better than the other three. Those numbers are not a fluke. After Babin's arrival, Tennesee’s sack total went from 32 in 2009 to 40 in 2010. Babin always had the ability, just never the right situation. Now with Washburn, Trent Cole, DRC and Samuel, his situation is no doubt even better. His arrival also allows Cole to take a breather from time to time. Cole played in 901 of the teams snaps which is about 90% of the teams total. That is a lot and we witnessed his production decline quite a bit the last 5 games of the season.  Cole’s first 12 games, he had 9 sacks, 13 QB hits and 46 QB pressures. In his last 5 including the WC game, he registered just 1 sack, 2 QB hits and 10 pressures. With Babin on the line, Cole could be relieved for Tapp or someone else without sacrificing too much pressure. A fresher Cole is a more dangerous Cole.

Get ready people, Week 1 is right around the corner. With the additions made so far(with possibly more to come), this defense should be very exciting to watch….for us Eagles fans of course.