Pro Football Focus has been publishing some interesting research this week on pass protection. One of the things they did which I thought was very interesting, was to chart how many blockers per pass play that a team would use on average. The idea is to show us which teams use more extra protection.To be fair, there isn't a whole lot of variation as all teams are between 5.3 and 5.8 blockers per pass play.

But what does this mean? And more importantly does it correlate to less sacks? We can look at what it means to keep in extra blockers first. If for instance, you keep in your TE to block, he offers another guy to take on pass rushers rushers to protect the QB, but that also means you have one less guy out running a pass pattern. So if pressure does get to the QB, he's got less options.

On interesting case is the New York Giants. They use the fifth most blockers per pass play of any team in the leauge and gave up a league low 16 sacks. However, Eli Manning led the NFL in picks. So maybe the extra blockers are helping him from getting sacked, but the lack of options to throw to is leading to more picks?

For what its worth, the Eagles use the 7th fewest blockers per pass play.

What I wondered when I looked at the list, was how strongly keeping in extra blockers correlated to actually preventing sacks? Now, of course as with all football stats this doesn't account for nearly all the factors that go into what a sack happens and as you'll see there's not a very strong correlation, but the trend I did see was interesting. 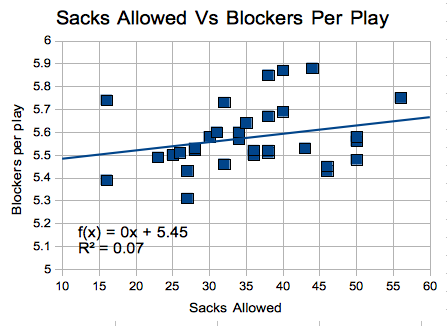 Like I said, it's not a strong correlation, but the general trend is that teams who keep in extra blockers give up more sacks. In some ways, that makes a lot of sense because generally you see teams using more max protect when they aren't confident in their offensive line or QB. If the line isn't good or if your QB is inexperienced or mistake prone, you're going to give up more sacks.

Here is the full list of teams sorted by blockers per play with their corresponding sacks allowed last year.

There are certainly outliers. The Colts for one, who use the second least amount of blockers per play and yet gave up only six sacks. Again, that makes a lot of sense. When you've got a QB like Peyton Manning, you're better off dealing with pressure by giving him more options to throw to, rather than keeping guys in as extra blockers.

Look at the Cardinals and Bills... Almost the same amount of average blockers per play and yet Arizona gave up 16 more sacks. Starting two different rookie QBs at times last year probably didn't help the Cards as far as this goes...

PFF used a couple other factors to rank teams in terms of pass protection and the Eagles came in at #23. However, they admitted that the ranking was flawed given the presence of Michael Vick.

It was Greg Cosell who rightfully pointed out that Michael Vick will always make his offensive line seem worse than it is. Players like Vick tend to invite pressure, with their ability to deal with it leading to those breathtaking highlight reel plays that so vividly cloud judgment come end of year awards time. So while the line itself is nowhere near as bad as 23rd in the league, the unit as a whole suffers. It doesn’t help they have Jason Peters no longer protecting his QB’s blindside, but primarily this rating comes down to the Eagles having a quarterback happy to hold onto the ball to make something happen.