Share All sharing options for: Tales From The 2011 Eagles Draft Day Party

Last night, I had the privilege of experiencing what our good friend 700 Level once described as "the Eagles' best kept secret:" the Philadelphia Eagles Draft Day Party.

For those of you that don't know, the Eagles host this draft day event every year at the Linc, opening their doors to allow fans to explore the locker rooms, the field, and the club level. Televisions blare out the latest draft news from every corner and the PA system is tuned to the NFL Network, so no matter where you are in the stadium, you can hear what's going on.

The event is only open to 6,500 fans and sells out very quickly. This year, it took less than four hours for fans to snap up every last ticket.

More after the jump...

Since the doors opened at 6:30, fans had plenty of time to explore before the draft began. My first stop was the visitors locker room, which shall we say, was a little barren (and smelled kinda funky): 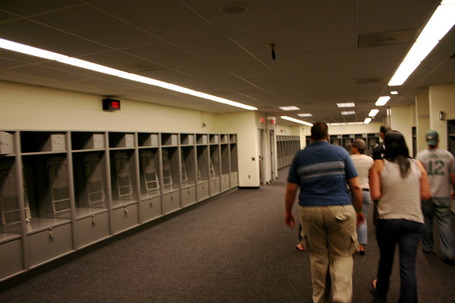 The security guard on duty urged us to continue on to the Eagles locker room, which, he assured us, "made this place look like the low-rent district." Boy, was he right. 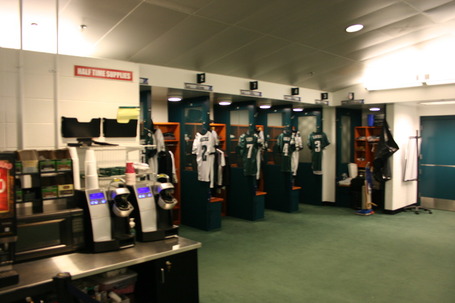 One guy on our tour jokingly asked if Michael Vick regularly sipped cappuccinos at halftime.

The staff had opened up a large section of the room, roped off to prevent fans from rummaging through the lockers. I felt a little bad for guys like Quintin Mikell and Colt Anderson, though. Their lockers were so close to the fans that anyone with sticky fingers could have grabbed a souvenir bottle of Muscle Milk, if they were so inclined.

Our tour over, I headed over to the Pro Shop, where the fans in attendance were able to get a special 50% off of most items. Out in front, they had a rack with pre-worn practice squad and training camp jerseys for $20 each. I was tempted to pick up a Jack Ikegwuonu jersey just for the hell of it, but I didn't have any luck finding one. Sorry, JIBTA.

For a healthy meal of cheesesteaks and beer, I headed up to the club level, where the draft was just beginning. WIP was broadcasting live from one corner of the room and "E-A-G-L-E-S Eagles!" chants could be heard every few minutes.

As I searched for a place to sit, I couldn't help stopping by the Eagles cheerleaders area, where the new girls were showing off to a very appreciative crowd. 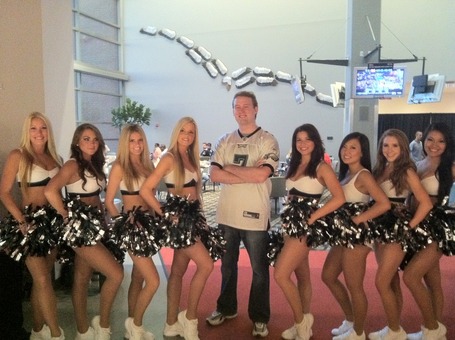 After Cam Newton's pick was announced and the boos quieted down, I met up with Tracer Bullet and we headed down to the field. The staff had set up several drills, so that those who participated could brag (guilty) that they had actually caught a pass on the field at the Linc. 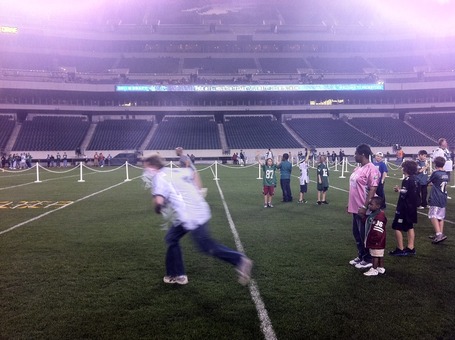 Tracer and I spent most of the night discussing who could fall to the Eagles at #23, especially with Prince Amukamara slipping and Jimmy Smith sticking around as expected. We happened to be around midfield when the jumbotron began showing images of Danny Watkins on the phone with the Eagles. The assembled fans fell into a hush as Tracer's anguished scream echoed throughout the stadium.

Admittedly, my knee-jerk reaction was a very similar one, but after listening to Andy's press conference in the emptied-out club level, I began to see part of the reasoning behind the pick. In the end, I left the Linc in high spirits. Regardless of who the Eagles had chosen with their first-round pick, the experience I had had at the draft party that night was one to remember.

Although tickets can be hard to come by, I urge you all to give the draft day party a shot next year. It certainly beats watching the draft anywhere else.