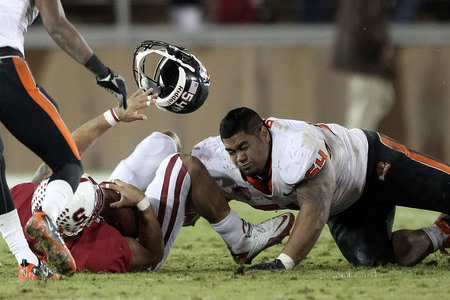 [Note by JimmyK, 03/07/11 9:09 AM EST ] - Great piece by our official BGN representative from Denmark,  Isi_eagle, who has some interesting inside perspective of NFL Draft prospect Stephen Paea:

Before I start the write up on Stephen Paea, I would like to tell very briefly who I am and why I am doing it.

I live in Denmark and attended Oregon State University (OSU) last year during the fall term as an exchange student. I’ve been involved with football for the past 6 years as a DLine coach for a local amateur club team. While I was at OSU, I got an opportunity to attend meetings, practices and games, as a kind of unofficial "internship". I worked primarily for DLine coach and therefore was most involved with that unit.

That is where I met Stephen Paea and became friends with him. I will share my view of his on and off the field skills, so you guys can have a greater understanding of who Stephen Paea is.

I was thinking about doing such an evaluation for some time. I was sure that sooner or later, buzz around him would be created and people would put up a lot of information on him, but it didn’t happen.

The biggest push was though following tweet from Adam Schefter:

"Of the two men I never heard of before Sunday, Oregon State DT Stephen Paea made more of an impression on me than James Franco."

I was surprised to see a known football reporter not ever hearing about Stephen Paea. So this one is for Mr. Schefter and all of you, who don't know who Paea is.

When talking about his on-field skills I will try to be as objective as possible, plus my experience of coaching might not be as great coaches on college level, but nevertheless it gives a good base to evaluate him as a player. Regarding my evaluation of his personality, you can expect that it will be 100% subjective.

Much more after the jump...

49 reps with 225 lbs in bench press! I could easily stop right here. There are a lot of discussions whether bench press at scouting combine tells you anything, I won't take up this discussion, but I'll say one thing: The NFL has a large number of strength and conditioning coaches, I would assume that they have thought about it a number of times and since they haven't removed bench press, it gives them an opportunity to evaluate players in one way or another.

Paea's body structure is very thick. He doesn't look like an average DT with a lot of muscles, but still chubby. Wide shoulders, very solid biceps and triceps and a wide and massive chest show that he contains a significant amount of strength in his upper body.

But don't underestimate his lower body. At some point last year he squatted 650 lbs and took 360-ish lbs in power cleans, which is impressive by any standards. For comparison's sake I remember reading last year that Ndamukong Suh maxed out 590 lbs.  You can also see the power of his lower body, when he is on the field, more on that later.

He has quick feet for a guy at 303 lbs and has an impressive game speed. One of his strength and conditioning coaches told me last year that he ran around 4.8 seconds in the 40. As an example, I would like to bring up a game (USC at OSU) from last year. Jordan Poyer (nickel CB at OSU) is a very fast player. On one play he intercepted a pass and returned it all the way. On his way to the endzone he had a blocker down the field in front of him: Stephen Paea. Personally I couldn't believe my eyes when I saw that play

OSU is using "gap-cancel" system. Primarily assignment for DLineman is to cancel the gap, either by penetrating it quickly or use an OLineman's body to do so.

His strength is probably his primarily weakness. He knows that he is physically dominating and therefore relies too much on his upper body strength. From time to time he doesn't extend his arms, which puts OLineman too close to his body and allows him to hold. I also observed that sometimes he simply doesn't break down before the tackle and rep up the ball carrier. There were a few times that QBs and RBs got away from him, because he tried to arm-tackle them. At the same time it affects his pass-rushing, he needs to learn and implement more pass rush moves, because he won't be able to dominate OLine in NFL by only utilizing his body strength. Funny fact: if he actually controlled his explosiveness and strength, he would probably double the number of his sacks.

He's explosive of the ball, like a missile, gets vertical very fast, which contributes to his tackling problem.

During the months I observed him and his teammates, he was one of the most hardworking guys in the meeting rooms. He loves to spend time in the gym. Even though he was the best player on his position, he would constantly spend time in the film room after practice to watch his own reps or/and study opponent.

His football IQ is high; he understood his role in the system. Therefore he was given an opportunity by his coach to be creative in certain situations, if he observed any tendencies during the game. He utilized often that opportunity and created the plays on his own.

Where does he fit in:

Perfect fit will be a 3-tech or a 1-tech in 43 Defense, as he is strong and fast, can take on double teams and split them. He can always put pressure inside, even if he doesn't make a sack, he will destroy QB's pocket.

I want to argue that he can actually play a 5-tech. He has the strength and the speed to do so. Main concern is that it will take away some of his strength in run situations, because he would have to be responsible for two gaps and therefore can be as aggressive as he is used to.

Stephen Paea was born in New Zealand and raised in Tonga. He moved to US at age 16 with his twin brother and mom. He has three brothers and a sister. He started to play football at the age 17 in highschool. Afterwards he enrolled at local junior college and then was recruited by OSU.

His mom brought him and his brothers to the states in order for them to get an education. When he arrived he had no language skills.

The first time I attended the practice, I introduced myself to a few players and not one of them approached me, which is understandable. The only guy that did after the practice was Paea. It is an example of his open mind and how nice of a guy he actually is. If I didn't know who he is, I would never imagine that he was actually a star player on his team. He is down to earth.

He is a family guy. His family supports him every single step. He prefers to spend the time with his family, rather than going to a party with a bunch of friends. Not that he is not a social person, as he has a lot of buddies in the local area, but he values the time with his family a lot. One of his biggest dreams is to get a large house, so he can have all his family under one roof. I've had a pleasure of meeting his brothers and parents. Honestly I've never met a bunch of guys that are so nice and easy-going. You can feel their brotherhood and it is clear to me that they make each other stronger.

He also has a girlfriend and a little girl and usually having a child, makes a person much more mature and Paea isn't an expception.

He is one of those guys, that is nice and polite guy off the field, but as soon as he puts his helmet on, he turns into a beast. He is very competitive and he knows what he wants. He knows that he is one of the best, but he won't say it out loud, instead you will see him lead by example.

He is a fighter, how else would you call a guy, who during the last 6 years, learned English, completed a college education in a foreign language and excelled in a sport, which is very competitive. Now he is on his way to become professional with all opportunities open to become a star. To achieve such accomplishment it demands a power of will, a strong soul, a competitive mind and an exceptional ability of understanding what is right and what is wrong. I know that, because I have the same personal experience. We see many young people, coming to a new country and seeking easy ways, which usually leads to a criminal world. Only strong people will take the hard path in order to build an honest and bright future. That is Stephen Paea. A young man, who knows no easy ways, but knows the right ways. In a fairy tale language he could be described as a man with a soul of a tiger, strength of an ox and a heart of a lion.

It is obvious that Stephen Paea has a lot of strengths as a future NFL player, but he also have a few weaknesses that NFL DL coach will have to work with. Those weaknesses can be corrected. He needs more coaching and a bit more experience. After all he has played the game only for 6 years, which means that he has tons of upside. I strongly believe that he belongs in the 1st round and I think he will get drafted there. We have seen a number of times, that players, we haven't heard much about got drafted early, e.g. Tyson Alualu in 2009 or Brandon Graham last year, everyone thought that he would be first picked in the last part of the 1st round, but he was off the board already at 12th overall. If there a few scouts that share the same opinion as me, Stephen Paea will be this year's Tyson Alualu. But no matter when he will be drafted, he will be a great asset to that team and hopefully in a few years we will see him as one of the best on his position.

And yes, I have absolutely nothing bad to say about his personality. Someone told me that I might have a man crush on him, I wouldn't say that. Instead I would say that I impressed by his achievement in such short time period, I have tons of respect for him and I from all of my heart, I wish him the best of luck.

I would like to thank JimmyK for proofreading and editing.I hope that you enjoyed the reading or at least got some useful information out of it. I know that there is a lot of information above and therefore thank you for taking the time to read it. Furthermore take your time to listen to his interview on Jim Rome show (I linked to the Beavers' facebook page where you can access the interview): http://www.facebook.com/OregonStateBeavers ; you can also find it here, but you need a login: http://www.jimrome.com/take/attention-gym-guy/23352