Share All sharing options for: Googling This Weekend's QB Matchup

Google's instant search feature continues to reveal some interesting things about what people are searching for. As you type a search term, it gives you suggestions as to what you're looking for based on the most popular things other people have searched for. If you google any NFL QB + is... you get some crazy suggestions. So for the rest of this year, we're going to see what people think of the oppositions QB.

As a bonus this week, I decided to throw in the Eagles possible starter as well. 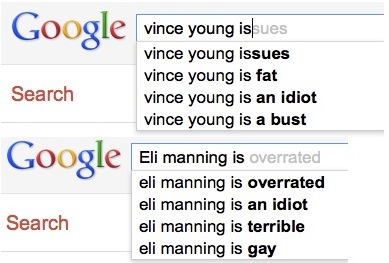 That watch commercial may think "Eli Manning is... unstoppable" but the masses on Google don't seem to agree. They seem to think he's an overrated, gay idiot who is terrible. For whatever reason, a shocking number of people are googling almost any QB's name and "is gay." I have absolutely no idea why.

Not Vince Young though! People just want to know if he's a fat, idiot bust with issues.