The dream team has failed. Somebody forgot to tell Vince Young that dreams occur at night, in the midst of darkness. Our dream turned into a nightmare. But the team has awoken from their dream state and is slowly awaking to the brisk and hopeful light of a new day. Our nightmare is fading away and the "redeem team" is alive and kicking.

After 3.5 rough weeks, things are looking up for the Eagles. And doesn't the "redeem team" fit the Eagles so much better?

- to free from what distresses or harms

- to extricate from or help to overcome something detrimental

- to free from the consequences of sin

- to change for the better

It fits the players and people on this team. And it also accounts for the improved play in the past one and a half games. This is no longer the "Dream Team", we're now the "redeem team". Think about it. What is a notion that this team can get behind? I'll answer that for you: redemption. 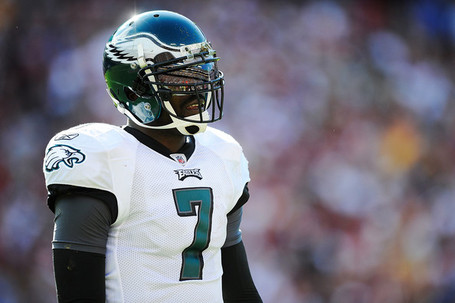 Michael Vick is the clear example of this. He has gone from being an incarcerated QB with a reputation for laziness and a bad attitude to being an all-pro caliber star with a noted work ethic and leadership abilities. Redemption.

The Michael Vick story is truly remarkable. The highs and lows he has been through in his life and career are astounding. He was a phenom who coaches, scouts and fans alike marveled at. He was an elite recruit coming out of high school. He was the #1 pick in the NFL draft. He was the first QB to ever win at Lambeau field in the playoffs. He led the Falcons to an NFC Championship. He had endorsements coming out of his ears. Michael Vick was on top of the word. Suddenly his attitude came into question, his work ethic was put down and then out of the blue came his dog fighting ring. From the top of the world, to the bottom, that's the first half of the Michael Vick story, the tragedy.

Then, he gets out of prison and most teams won't touch him with a ten foot pole. He signs with the Eagles as a humbled man. He overhauled the fundamentals of his game. He devoted himself to the game and his team. Then, he bides his time on the bench and suddenly he enters the game and changes the path of the Eagles franchise. He got what he put in and he became one of the league's premier players. From rags to riches, that's the second half of the Michael Vick story, redemption.

If there is something that this Michael Vick led team can get behind, it's redemption.

But Michael Vick isn't the only guy who knows what it's like to be down and out only to rise to the top again.

DeSean Jackson was too small to be a great football player. Now he is one of the league's most recognizable players. Redemption.

Cullen Jenkins went undrafted and was left for dead by the Packers franchise, now he is one of the most disruptive interior linemen in the league. Redemption.

Antonio Dixon grew up in the roughest part of Miami. He was homeless for part of his life. He is dyslexic. His father was in prison. He had a stutter. He went undrafted. He became one of the best run stuffers in the NFL. Redemption.

Jason Babin was labeled a bust and signed off the streets by the Eagles in 2009. Two years later he is close to leading the NFL in sacks and is one of the most productive ends in football. Redemption.

Brian Rolle was called too small to play linebacker even in college. Now he is the best linebacker on the Philadelphia Eagles. Redemption.

Asante Samuel was too small and too slow to make it. There are stories about Asante running with a running parachute to try and get faster because other kids would call him slow. Now he is on pace to become one of the all time greatest pass thieves in league history. Redemption.

Jim Washburn was actually in prison for a part of his life for his role in a steroid scandal at the University of South Carolina. Now, he is the most lauded defensive line coach in the business. Redemption.

Juqua Parker, Jim Washburn, Doug Pederson and Cullen Jenkins were all members of 1-4 teams that made the playoffs at some point in their careers. Redemption.

Redemption is a message this team can get behind. No more of that dreamer stuff. Redemption.

But it's not just a message. We're executing it.

In the last 6 quarters of football the Eagles have outscored their opponents 37-23. That's a point differential of +14. If you extrapolate that over the entire season that means the Eagles would have a point differential of +56 on the season which would put them at 6th on the entire season despite playing one less game than all the teams above them.

If you extrapolate the scoring defense numbers over the entire season the Eagles would only be allowing 15.3 points per game. That mark would be second best in the NFL.

In the last 6 quarters of football the Eagles have allowed 5.2 yards per play. That mark would put the Eagles at tied for the 9th spot in the league in that regard.

The Eagles have given up 111 rushing yards in the past 6 quarters. That means they're giving up 18.5 rushing yards per quarter and if you extrapolate that number, the Eagles would be giving up 74 yards a game. That would be the second best mark in the league.

Against the Redskins the Eagles only missed 4 tackles.

Are these small sample sizes? Absolutely. But they illustrate a correction to the fundamental flaws of this team. The Eagles could not stop the run and they could not tackle. That changed in the last 6 quarters. How? Simple adjustments. They played the wide 9 less. They moved Jamar Chaney closer to the line of scrimmage. They put in Kurt Coleman and Nate Allen together and they look rejuvenated. Nnamdi has been tackling. Brian Rolle is coming along. And Derek Landri has looked very good stopping the run. And you can see the defense is gelling too, everyone is more decisive and playing faster. The defense has changed at a fundamental level. They're tackling and they're displaying the "want to" as well.

Is there a game where we're clearly overmatched? Absolutely not. I see a few games that are going to be challenges but that's it. The Patriots game is the only one that I would really be concerned about because of their tight ends.

After that dreadful start, the Eagles are 2-4 with the next three games at home and they're only 2 games off the division lead. We're still in the thick of things at this point. The division is wide open and we're only 1.5 games behind in the wild card race. We're not down or out. We're the dark horses. We're the underdogs moving forward. We're the redeem team.