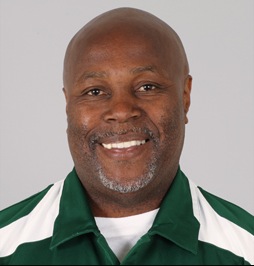 Thurman at USC, also suggested him as possible candidate this weekend. Bear in mind that neither were claiming that the Eagles had any interest, just that he might make a good candidate.

He's spent the better part of the last decade as the secondary coach of the Ravens and Jets. He coached the Ravens secondary from 02-08, then followed Rex Ryan to New York where he's coached the Jets secondary since then. Obviously, he's coached some of the best secondaries in the NFL over that time with superstars like Ed Reed & Darrelle Revis. Over his tenure with the Ravens, that team led the NFL in interceptions.

The Jets secondary has arguably been the strength of the team over his time there with the development of Darrelle Revis being his crowning achievement. Revis has been a pro bowler in all three seasons he's worked under Thurman.

Thurman was also a two time All-American safety at USC and played nine years in the NFL with the Cowboys and Cardinals. Like I said, Gary Cobb was a former teammate and has great things to say about Thurman's abilities as a teacher.

He was one of the best free safeties that I’ve ever seen at reading a quarterbacks eyes and he’s very good with young defensive backs.  Ronnie Lott mentioned Dennis in his Hall of Fame acceptance speech because Thurman helped him when he was at USC.  Ed Reed will make some of those same statements when he goes into the Hall of Fame in the following decade.

Thurman was a player/coach back in the 1980′s with the Dallas Cowboys and he did a nice job of working with Everson Walls, Michael Downs and the other young defensive backs there.  He’s always been a student of the game, who could read routes and anticipate what the opposing offense was going to do.

There's another interesting mark on Thurman's resume that I haven't mentioned yet. His first coaching job was with the St Louis Cardinals as a secondary coach from 88-89. Also on that Cardinals defensive staff was the late Jim Johnson. Thurman left the Cards to become secondary coach at USC for the next 8 years.

It's been widely reported that the Eagles will be looking to interview members of the staffs of the teams eliminated this weekend. Whether or not Thurman is among those remains to be seen.

It's also worth nothing that Thurman did play a part in the Inez Sainz mini scandal with the Jets earlier this season. Among the allegations she made toward the Jets, one involved Thurman and head coach Rex Ryan allegedly overthrowing passes on purpose so that they would land near her. What if anything that actually means, who knows? But if the Eagles did show any interest in him, you can bet you'll see a few stories about the incident.