Why the Eagles can, should, and I think WILL sign Nnamdi Asomugha... and not just because I REALLY want them to

Share All sharing options for: Why the Eagles can, should, and I think WILL sign Nnamdi Asomugha... and not just because I REALLY want them to

In case you're unfamiliar with Nnamdi Asomugha, he plays cornerback for the Oakland Raiders, or at least he used to.  This past season, in 14 games played, NFL quarterbacks only threw Asomugha's way 33 times.  In other words, they don't even bother looking his way.  Just 13 of those passes were completed for 205 yards, and no touchdowns.  That translates to 0.9 catches allowed for 14.6 yards per game.  That's just stupid good.  Looking at his stats is actually comical.  He only had 19 tackles and no interceptions, because again, NFL quarterbacks want no part of him.  Compare his numbers to little-used Eagles rookie Trevard Lindley, and if you didn't know any better, you'd think Lindley had a better season.  That's not to pick on you, Trevard... I have high hopes for your career here, but I digress.

We all know why Asomugha would be a great fit - The Eagles have a big fat hole at RCB, and Asomugha would fit into that empty spot ever so snugly.  He and Asante Samuel would form the best corner tandem in the NFL... by far.  If QB's continued to throw away from Asomugha and target Samuel, then Samuel may just be a candidate to break interception records.  The Eagles could send the house and be confident that they're unlikely to be burned badly on the back end if blitzes don't immediately get to the QB.  BLAH BLAH BLAH, YADA YADA YADA.

Here's the rub - Precisely 31 other teams league-wide can also come up with compelling cases to sign Asomugha and make it seem like a no-brainer.  He's that good - a rare talent that's on the open market and an absolute sure thing at an extremely important position in today's pass-happy NFL.  He's even far more of a sure thing than Samuel was when he was a free agent back in 2008.  So why should Asomugha sign with the Eagles over any of the other 31 teams that could greatly benefit for his services?

The simple answer: The Eagles are in a perfect position to be able to pay, or rather, overpay him without dire consequences.

Here are the Eagles' players salaries for 2011 and beyond:

*It's important to note that NFL contracts are very complex.  The following table lists salaries only, and while mostly accurate, the figures may not be 100% accurate for every player.   They don't show the signing bonuses various players may have signed.  For example, Brandon Graham's rookie contract was for 5 years, $22 million.  Roughly $15 million of that was in signing bonuses.  Sometimes signing bonus money is paid all upfront , other times it's stretched over several years (although even in those cases the bulk of the signing bonus is typically paid upfront).  The purpose of this table is to show the structure of the players' salaries, all aggregated by hand from NBC's rotoworld.com.  If you're so inclined to see the figures with some signing bonuses included, I'd recommend checking out eaglescap.com, although it's not quite up to date.  I included the most relevant Eagles.  There were 59 that I felt were worthy of mention (obviously they will not all be with the team next year as many are unrestricted free agents):

It's utterly remarkable that as of today, only 9 Eagles are scheduled to make at least $2 million in salary in 2011.  So how did they get there?  Well, as we all know, they purged a boatload of veterans this past offseason, and with them their lofty contracts.  Here's a quick list of all the players that the Eagles got off their books within the past 12 months:

- Donovan McNabb - In 2009, the Eagles redid the last 2 years of McNabb's deal, which was $24.2 million over 2 years.  They dumped that contract when they traded him to the Redskins.

- Brian Westbrook - The Eagles saved $7.5 million when they decided to release Westbrook in February.

- Darren Howard - The Eagles signed Howard in 2006 as a free agent for 6 years, $32 million.  Just like with Kevin Curtis and Shawn Andrews, the Eagles released Howard in March of 2010.

- Chris Clemons - Signed for 5 years, $13.5 million in 2008.  The Eagles traded him to Seattle, although they received a similar contract back in return in Darryl Tapp.

- Chris Gocong - Gocong was also traded along with Brown, and would have made $1.7 million in salary in 2011.

That's TEN veterans with significant contracts that the Eagles got off their books in one offseason.  They were replaced by young players (15+ rookies played for the Eagles this season) that are mostly making near the league minimum.  If the Eagles like Asomugha (and how can they not?), there's really little excuse not to back up the Brinks truck for him, especially when the team is loaded with such an impressive young nucleus that should be a serious contender as it is in 2011.

Howie Roseman, look at me.  You and Uncle Joe have done an amazing job managing the cap and building a fantastic young core through the draft, making prudent decisions and not going hog wild on garbage like some of the other crazy GM's in your division.  And I applaud the work you've done.  (Clapping).  However, now is the time get aggressive and add a true difference maker, even if you have to overpay.  The money is there - I see it. So again, look at me: 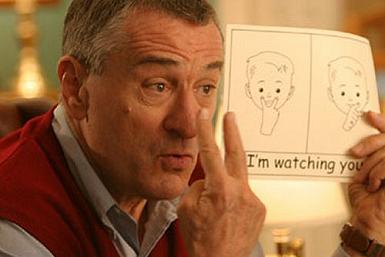 Get it done.  No, seriously.