Trentonian Columnist Thinks You're Racist If You Don't Like Michael Vick

When I'm looking for good football analysis, of course I go straight to the Trentonian. I kid of course... The Trentonian doesn't even appear to have a person on staff who actually covers the Eagles. That might explain why they've got people like LA Parker writing race-baiting opinion pieces on the team...

This is an actual sentence from the article titled ""Condemnation of Philadelphia Eagles' Michael Vick shows racist America placing pets before blacks."

Get ready to count your losses, Eagles fans, because your team has no shot this year without your black Negro, dog-killin’, prison-serving quarterback.

The rest of the article is just a long rant about how racist Eagles fans are, the city of Philadelphia is, Buddy Ryan, and eventually just how racist the entire United States apparently is. I won't even bother quoting more of it. You can read it if you like, but I'd actually recommend you go check out Hugging Harold Reynolds response to it.

The funniest part is that the paper's own front page does exactly what the article deems as "racist" and "condemning." 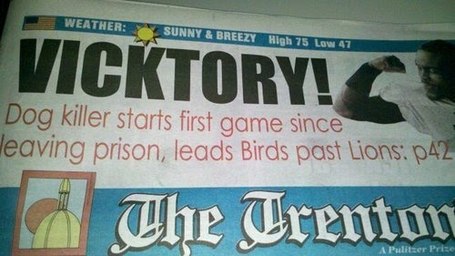 "Dog killer starts first game?" Really? So the paper's message is if you liked what Michael Vick did, you're bad because he's a dog killer. If you didn't... you're racist.

They're clearly just going for shock value over integrity... I guess it worked in the short term because here I am writing about it, but we'll see how many Eagles fans ever turn to the Trentonian for news on their team again. This is assuming that any currently still do...