Here we are back at Lehigh for yet another day of live coverage. Today was the first real hot and humid day up in Lehigh, until now we'd been spoiled with relatively mild weather and overcast skies which kept the heat down... but today it was hot and baking down. You could tell that the team was extra focused on keeping guys hydrated as they were constantly yelling "get fluids!"

Injuries.... No one was carted off today and both Asante Samuel and DeSean Jackson were back out on the field. Neither were in pads and spent the practice working out on another field. They both appeared to be moving around fine.

The first real interesting part of practice was the hot read/blitz drill. The defense would blitz every down and the QB would have to make the correct hot read. Kevin Kolb hit Riley Cooper as his hot read four straight times, which really whipped the crowd up. The only time in the entire drill that Kolb failed to his his hot read was when Trevor Laws burst through the line and swatted away his pass. I put in my notes that Kolb was noticeably better in this hot read drill than Vick was. While Kolb would quickly hit his read nearly every time, Vick would often hold onto the ball a bit or take off running. Of course, taking off to run in practice is kind of silly if you're wearing the red jersey and no one is allowed to touch you.

Then came what is probably my favorite drill, the WR vs DB one on ones. Today's drill didn't have the usual excitement given the fact that Jeremy Maclin, DeSean Jackson, & Asante Samuel weren't there.... but it was a pretty good show nonetheless. Two guys who stood out early were Hank Baskett who streaked down the sideline to catch a long pass despite really good coverage, and Dimitri Patterson who had an absolutely vicious jam on Chad Hall that never really let the WR start his route.

The star of the drill though ended up, just like yesterday, being Jason Avant. He put a devastating move on Dimitri Patterson which sent the corner over the middle while Avant changed course and ran wide open down the sidelines. Patterson was at least 10 yards away when the ball was caught. The crowd loved that move.

As with the hot read drill, the defense started to win as soon as Kolb got off the field. In fact they'd shut down the WRs several times until Kolb stepped back up and proceeded to complete 5 straight passes. Kolb seriously looks for real out there. 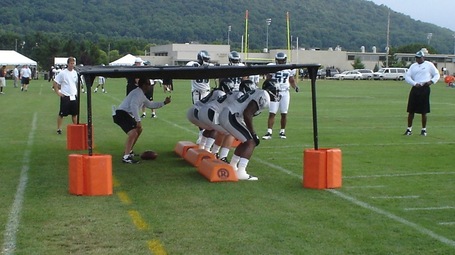 The practice then went live and the hitting began. I heard ESPN's Matt Mosely remark that he'd seen more contact at Lehigh than at any of the other camps he'd visited. The first live drill was 3rd and short. LeSean McCoy put a nice move on I believe Joselio Hanson who had to drag him down, earning a pass interference flag. Michael Vick came in and ran a bootleg that was blown up by Kurt Coleman in the backfield. That was the first of two really great plays from Coleman today. Vick then went to handoff to Eldra Buckley and the two ran into each other.

That brings me to one of my plays of the day. It wasn't something the crowd probably noticed, but I was impressed. Rookie TE Clay Harbor took on DE Daniel Te'o-Nesheim by himself and absolutely stoned the guy. Just stood him up and drive him back. That's blocking ability you rarely see in a rookie TE. After practice, Marty Mornhinwheg remarked "Clay will hit you, now."

Harbor said he takes pride in his ability to block.

"The other tight ends are pass catchers, but they're good blockers as well; I think all of us can do both very well. I take a lot of pride in my blocking and I know it's something that can separate me from other people, but all of the guys on our team are good blockers. I just take pride in that, and more of a mindset than anything. Some guys are more receivers, and they're a lot more finesse players, but I just like to grind it out and hit people and see how they react to that."

Then came the live goal line drill. LeSean McCoy scored a few TDs, but another candidate for play of the day happened when RB Charles Scott got the handoff. Scott is an absolute load and at 238-pounds he outweighs safety Kurt Coleman by over 50-pounds... but that didn't stop the rookie from meeting Scott at the goal line with a big hit and stopping him dead in his tracks. Scott continued to try and push over the line and Coleman held his ground. Really fantastic effort.

Later in the drill Mike Vick and Eldra Buckley would botch their 2nd handoff of the day. Clay Harbor would catch a nice TD in the corner of the end zone from Mike Kafka.

David Akers then put on a show hitting a number of 50+ yard FGs in a row to the delight of the crowd...

Then practice went live with an 11 on 11 scrimmage. This is as real as it's going to get at camp and the hitting was pretty nuts in this drill. LeSean McCoy had a nice run where he broke free and would have scored a TD were it not for a saving tackle from Trevard Lindley. Speaking of Lindley, some scouting reports called him a guy that doesn't like contact, if that's so he certainly hasn't shown it in camp. He got himself right in on a few good hits in this drill. Riley Cooper had a nice play where he camp back to catch a Kolb pass that had been tipped at the line by what looked to be Jeff Owens or Daryl Tapp. Charles Scott got popped again, this time by the duo of Jamar Chaney and Keenan Clayton.

That leads us to our final candidate for play of the day. Eldra Buckley caught a quick pass, turned around and nearly had his head taken off by Stewart Bradley. It was the loudest hit of the day and Buckley's helmet went flying off. He stayed on the ground looking like he was seeing stars for a minute or so before he got up to applause from the crowd. Stew absolutely brought the thunder on that hit though.