If you missed the recap of the morning session, check that out here.

The Eagles held a fairly light 10/10/10 practice this afternoon which ended on a very sour note. On what would be the final play of the day, Jeremy Maclin was running a route in a no pads/no contact drill. He planted his foot and fell to the ground... he did not get up. The crowd, the players, and the media all fell silent. It was the eeriest moment I've ever had at Lehigh. The cart rolled up, Maclin was helped up slowly and he gingerly stepped onto the cart clearly favoring his left knee. Several teammates came over to give him a pat as the cart drove off. Andy Reid decided to end practice early at that point.

Late we would be told that Maclin had a "hyperextended left knee" that the team would continue to evaluate him. A half hour or so later Kevin Kolb tells 97.5 The Fanatic that he had just visited Maclin who was positive and Kolb didn’t get the impression that the injury was anything serious. Maclin later told reporters "I should be alright" and was seen walking out of the locker room under his own power with his leg in a sleeve.The Eagles say they'll update us with more info tomorrow.

That was certainly the big news of the afternoon session, but not the only news. After the jump is a full recap and analysis of what went on.

The aforementioned Jeremy Maclin had an early offsides penalty in an 11 on 11 drill that seemed to frustrate Andy Reid, who pulled the WR aside for a little refresher on staying onsides... Ironically, the WRs all yell "FOCUS" before their warm up. 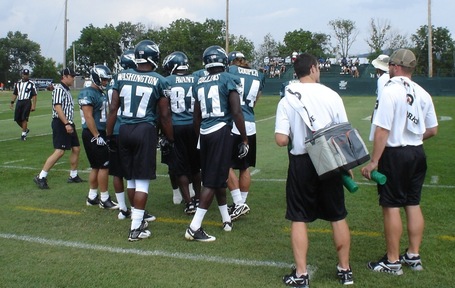 I'm going to try and ask someone about this tomorrow, but it seems to me that LeSean McCoy is holding the ball higher than he did last year. I haven't noticed him holding the ball in that slung low manner that gave us all heart attacks last year. He seems to hold it up near his bicep now ala Tikie Barber, at least as he's going through the line.

This afternoon was probably the best performance Cornelius Ingram has had yet. He got separation on a mid range catch from Kolb against the speedy Keenan Clayton. He also had a nice grab over the middle over Nate Allen. He reminded me a bit of the Packers' Jermichael Finley out there. Just a big target out that lets the QB throw high passes that defenders really don't have a play on. The catch over Nate Allen was that exact kind of throw. One of the last plays of the day was a leaping, fingertip grab over the middle from Ingram.  Got big cheers from the crowd. Really a solid afternoon for Ingram after being fairly anonymous in the AM session.

Mike Bell didn't practice, but was running sprints on another field and looked fine. He should be back soon.

Omar Gaither had a real nice play where he dove near the sidelines to break up a really well thrown ball intended for Clay Harbor.

If the AM session was about Kevin Kolb showing his prowess in the short passing game, the PM session was about him going deep. In one 7 on 7 he threw two perfect deep balls for TDs. The first was to Maclin from about 40 yards out which hit him perfectly in stride and just over some decent coverage from Trevard Lindley. A play or two later Kolb lofted another perfectly placed ball in the end zone to Riley Cooper again from about 40 yards out. Kolb aired out a few more times in the late session and looked really good doing it. As soon as he sees that WR get single coverage he launches it and lets them run right underneath it. Very solid day overall from Kolb.

While Kolb had the luxury of bombing TD passes all afternoon, the other two QBs mostly ran scout team offenses. the crowd kind of groaned as Mike Kafka specifically threw one pick after the other, but that's kind of the point of these scout team drills. You'll notice before the drill that a coach will show the QB a diagrammed play that the defense is going to defend. The QB just throws the ball where he's told.

That said, the defense still has to make plays... and they did. Stewart Bradley, who was solid in coverage all day, picked off a Vick pass over the middle. Ellis Hobbs, Joselio Hanson, and Nate Allen all picked off Kafka in the drills as well.

Bobby April has made it really fun to watch some special teams drills this year. He's very active and very vocal out there. You can also tell he's a teacher, as he's routinely showing guys what they did wrong and how to correct it. At one point Brandon Graham was on the punt coverage team and April is yelling at him "Get inside! Get inside of him!" Wow, does that look weird as I write it... Anyway, he was telling Graham to get inside the block of Leonard Weaver, who was keeping himself between Graham and the side of the field where the punt returner was. April stopped the drill and ran with Weaver himself showing Graham how to "get inside." I can't see any way this special teams unit won't be pretty good this year with April at the helm.

And did I mention... I was watching all this while standing right behind John Freaking Madden? 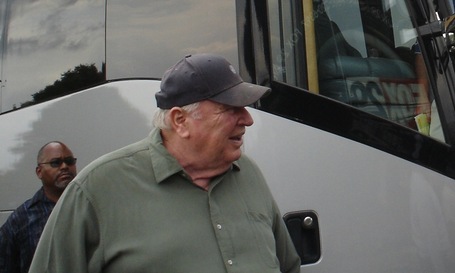