It was really a perfect day at Lehigh today with the sky being overcast and the temperatures hanging out in the mid 70s to 80s. Certainly a stark contrast from previous years here where it was like the 7th circle of hell... It was also military day at camp and about a hundred members of the armed forces were in attendance. The crowd gave the troops probably a 5 minute ovation as they marched around the field. After practice when Andy called the team together at midfield, he had the soliders join them and the team and soliders chanted "USA" together. Cool moment.

In true Andy style I'll start with injuries. I'm happy to report that no one was hurt at the morning session. Macho Harris sat out with a hamstring strain which Andy describes as the worst of the hammy injuries and it may be a few days before he gets back. A.Q. Shipley has a high ankle strain that could take a while to get back from. DeSean Jackson has a low back strain which is improving. Asante Samuel has a hamstring tweak and should start running soon. Antonio Dixon is undergoing concussion tests and could be out a while. Stacy Andrews sat out with a shoulder injury that Andy doesn't see as serious.

Camp started with some WRs doing high ball drills where the coach would throw a ball and the WR would have to jump up and catch it on the run. Coach David Culley told everyone to watch Jeremy Maclin for an example of the drill done perfectly.

The team practiced some bootlegs with Mike Vick where Max Jean-Gilles would pull and lead block for him, but it was funny to see how Vick would have to wait and slow down to get Max in front of him. Not that Max was too slow, but Mike wants to turn on the Jets.

Vick sailed a pass over Baskett's head early on, but overall looked pretty crisp today. He hooked up with Riley Cooper time and time again. If I had to count I'd say the two connected on what would have been first downs 7 or 8 times. In the hurry up, the 7 on 7s, and the live 11 on 11 situations.

Also, Vick has his wheels back. The guy looks at least as fast as Shady McCoy running out there.

Charles Scott spent part of the day working as a fullback again.

It's striking how much Kevin Kolb and Mike Kafka look like one another on the field. They appear to have the exact same body type and size. Although when the snap comes, it's pretty obvious which is which.... Kolb is light years beyond where Kafka is right now. The difference in field vision is obvious.

Funny moment early on, Kolb fired a pass that was ahead of Baskett on the sidelines, but Hank stretched to make the grab and ended up plowing over a camera man in the process. The camera survived but the stand was destroyed. Probably why cameras are supposed to stay behind the line of scrimmage...

Kolb looked great running the hurry up drills. The team would run quick hit plays to move up the field and he was dead accurate on every one. Hitting in guys in stride on these quick slants and outs is going to be his bread and butter.

Nate Allen got himself a "sack" of Kolb early on in the day. Sine defenders can't touch the QB, you kind of count it as a sack when he gets there before the ball is out.

Mike Vick hit Chad Hall in stride wide open over the middle on a 3rd down play and he dropped it...

Riley Cooper on the other hand, dropped nothing. As I said earlier he hooked up with Vick time and time again. It's clear that he not only has Vick's trust, but he's beating the second team defenders. Cooper also has gotten time with the first team and has pulled in a few passes from Kolb, including one where Kolb floated a pass over a defender using Cooper's size for a sideline catch. There was a lot of military from Florida there today and they all wanted Cooper's autograph. 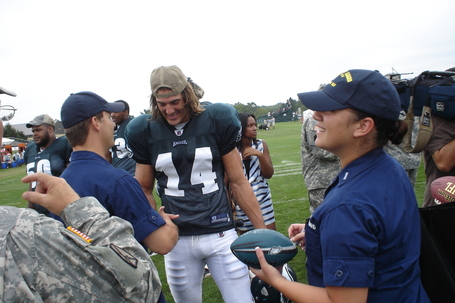 Today was an "over 30 day" so Juqua Parker had the morning off, which meant Brandon Graham ran with the first team defense. Today, I'd say Justice clearly got the better of him. Graham is obviously relentless out there and Justice held him when he had to, but he kept Graham off the QB. The kid does have power though, there was a play where he drove Justice back to where the QB was and Justice ended up throwing him off him into Kolb as he stepped up. Kolb ended up on the ground.

LeSean McCoy looked good again today with his biggest highlight being a play where he split out wide(ala Westbrook) and ended up catching a 40 yard TD off an absolutely perfect throw from Kolb. McCoy fought off coverage from Quintin Mikell on the play. Arguably the play of the day.

One of my favorite drills of camp is always the WR vs DB one on ones. Usually, Asante Samuel & DeSean Jackson trash talk each other the whole drill, but since both were out today WR coach David Culley and Quintin Mikell picked up the slack. Culley would taunt Q whenever a WR made a play and Q would claim he'd never have time to make the play during a game. Mikell made best play of the drill, reading Chad Hall like a book and breaking up an out pass from Kolb.

Jason Avant was absolutely uncover-able in that one on one drill. Every single time he'd make a quick move, get open, and haul in the pass. Maclin smoked Dimitri Patterson on a go route, but I still say Avant was the top WR in the drill.

Then the offense worked some red zone drills where they lined up at about the 5, but the defense won almost every time. That said, in the live hurry up drills Kolb was unstoppable. He gets the ball out so quick and sharp that the defense had no answer. Although if the drive stalls in the red zone, the defense will count it as a win.

Really good morning session from Quintin Demps, who picked off Mike Kafka twice. First on a goal line drill and then in a 7 on 7. Overall he looked really good today.

Trevor Laws was active out there and got himself a sack on Mike Vick. Daniel Te'O-Nesheim also got pressure up the middle for a sack on Kolb.

One guy I wanted to mention was WR Jared Perry, who the Eagles signed then cut a day later only to sign him again a day or two after that... He looked really solid today. Caught everything that came his way, looked fast, and got open. Not much more you can ask. 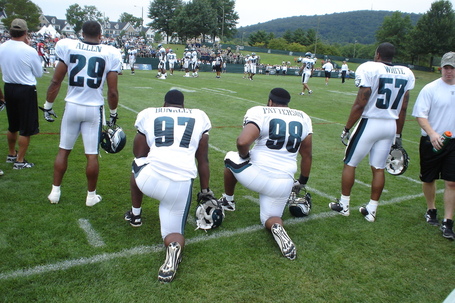