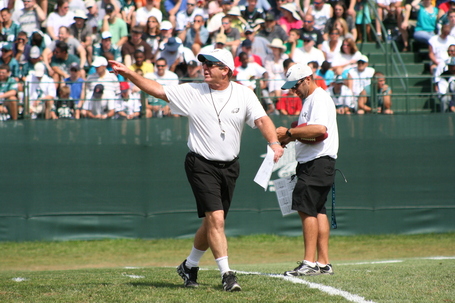 I stumbled across this interview with Bobby April on the mothership, and it's really hard not to like this guy.  He gives very honest answers, and a bunch of insights (either intentional or unintentional) into how the 53-man roster will shake out.  It's a great read, so check out the whole thing.  More after the jump, as I pick out what I think were the most interesting comments...

On who will be returning kicks and punts this season: "Coach and I have discussed that kicks will be (CB Ellis) Hobbs and (S Quintin) Demps, possibly (WR Chad) Hall. He's decided, at this point, how he wants to use the personnel. On the punt returns, there's a possibility of (WR DeSean) Jackson and (WR Jeremy) Maclin will return, but, again, he hasn't decided exactly how he wants to use personnel in this game."

On whether Hobbs is still the number one kick returner: "Well, Hobbs is a very good player. The organization and myself both feel that he's an outstanding player. I think we have a decision to make, so it would be in the best interest of the club overall. But he's definitely a good returner and he definitely can do it and he has experience doing it, but so does (S Quintin) Demps. I think Demps has a real good shot of being a good returner as well. He's tough, he's really fast and there's some competition there, but certainly Ellis is the guy that has the most experience."

I haven't seen anything out of Chad Hall that has been overly impressive.  I understand the fascination, but he's a loooong shot to make this team.  April's comments above sort of confirm that.  It appears he's not even in the discussion as a punt returner, and was mentioned as a bit of an afterthought as the kick returner.  Hall isn't going to be making tackles in kick/punt coverage, and he's not going to contribute in the base offense.  There's no value in a player that's essentially a backup kick returner.  Nice story, but simply not enough room for him.

On whether he feels that he will have a lot of input on the final roster cuts: "Well, always that bottom third of the roster is undetermined. Pretty much if a guy is starting here, he's not guaranteed that he's going to make the team. But if he's starting on offense or defense, he's got an excellent chance he's going to make it. So you're really dealing with all the back-ups. Then there has to be a wise, sage decision on how that guy can help you the most, which makes you a better overall team and that's where the head coach has to make the decision. He has no pet area in this deal. I'll voice my opinion of what I see from guys on special teams and then the coordinators and offensive coaches will voice what they see.

"Then based off that information and based off of his own evaluation of those players, he'll make some tough decisions because it is a tough decision. That third tight end, how much will he play in a game if he's not a very good special teams player. And if he's not a very good special teams player and he is going to play in the game, then what kind of hit do you want to take at that position on special teams. It's a really complex deal. It's a hard decision because these things are really close, they're really close. I have input in terms of opinion, but really my job is to prepare the guys to play as good as they can play. Express an opinion of how I think their performance is and then whatever is best for the organization, that's the team that we're going to put out there for the Green Bay game."

Oof.  Watch your back, Cornelius.

On whether there are any rookies who are standing out on special teams: "Well, you know, the guy that has really played a lot better than maybe I perceived the way he played at practice has been (CB) Trevard Lindley. He's been really good. He's been good at the things he does good, like being in that fold position on the kickoff return. He's made some plays that if he didn't make them, we would really be talking about kickoff coverage. We wouldn't be talking about it a little bit, we'd only be talking about it. So, he's been very good. He's been very good playing outside on their gunners. So, he's been impressive. I'm impressed with him, but I'm impressed with a lot of those guys.

"I think (WR) Riley Cooper's, you know almost every guy we've drafted has played well, I mean, has really played well. They're learning all of the time and they're going to bite the bullet a little bit on some of this because some of these guys don't have a whole lot of experience playing. And then you get into the factor of when they did play, they were competing against guys, 18-21 (year olds). Now when they play, there's a possibility that they're competing against the best players in the world for a 10 year stretch. So, there's some heavy learning and heavy adjustments that they have to make. It's different, it's different, even if they have played, most of them haven't. So, they're still growing. But like I said before, it's my responsibility to cultivate them really fast and we will be."

Lindley has been very good, and it's nice to see April single him out.  And oh yeah, Cooper's a good special teamer too.  Very interesting to see Cooper as the gunner on punts.  They trust him - Good to see.

On P Sav Rocca: "He's been fantastic. I mean, he's been a fantastic punter. He had a chance the other day, his numbers weren't that great. We cut-hand that play, I mean we're responsible for making it. It was kind of a quirky play. The guy signaled for a fair catch and then he muffed it and then we hit him and then it went awry and then the referee judged that we hit the ball. If we hit it first, then the fair catch signals off and then he picked it up and ran, you know, ran for 25 or 26 yards or whatever it was.

This is one of the all-time great special teams coaches in the history of the NFL calling Sav Rocca "fantastic."  Twice.  Maybe some better things from Sav this year?