Things I liked, things I didn't like in last night's sloppy preseason loss in Cincy

Share All sharing options for: Things I liked, things I didn't like in last night's sloppy preseason loss in Cincy

Very sloppy game last night, as the Eagles slogged through an ugly performance in Cincinnati.  Overall, the first team defense performed well, as did Kevin Kolb, at least with the hand he was dealt.  The interior offensive line failed to give Kolb any kind of time in pass protection, nor did they open up holes in the running game.  David Akers and Sav Rocca aside, special teams were atrocious, and remain a concern.

In a game that I'd like to quickly forget and struggled to re-watch this morning, there were both positives and negatives to take away from this game, which I'll detail after the jump...

Liked (in no particular order)... 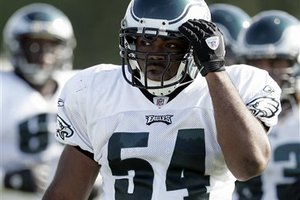 Trent Cole - Got pressure all night, made a subtlely great play on the TO end around on the Bengals' opening drive.  He's just a great player.

Stewart Bradley - Huge hit on Chad Ochocinco which caused a Quintin Mikell interception, although it probably should have been a penalty for a helmet to helmet hit on a defenseless player.  But still, he was everywhere last night.

Kevin Kolb - You know the saying "When life hands you lemons, you make lemonade?"  Well, Kolb made lemonade out of a steaming pile of turd-like pass protection.  Yeah, I know that doesn't make any sense, but I'm keeping it.  Kolb had no time whatsoever, and yet somehow completed 11/17 for 126 yards.  He showed the ability to make accurate throws on the run, which he was forced to do all night.  The play that I loved, however, was on the 3rd and 1, where he got the Bengals' DE to jump into the neutral zone on a hard count, knew he had a free play (and a first down), and delivered a strike downfield to DeSean Jackson.

Dmitri Patterson - Had a pick, and good coverage all night.  He even got some playing time in obvious pass situations with the 1's.  He's had a great camp, and his solid play has continued into the first 2 preseason games.  He has to make this team.

Sav Rocca - 45.2 yard punting average on 7 punts, including a 60 yarder.  He also landed a nice punt at about the 6, which the gunners failed to down before it bounced into the endzone.

Brandon Graham - I'd like to keep my expectations in check, but I'm starting to buy the predictions that Graham will be the Defensive Rookie of the Year.  He got pressure all night, and looks really solid in the run game - Loved the play where he absolutely destroyed a Bengals RB in the backfield for a loss.  I like Juqua Parker - I really do.  He's a good pass rusher, and can fill a nice role on this team.  But after watching the game again this morning, I consistently see Parker getting blown off the ball on run plays.  Graham needs to be starting, and I'll be shocked if he isn't by Week One.

Trevor Laws - He's a different player this year.  The play that stood out from last night was when the Eagles ran a stunt, and Laws looped all the way around 2 teammates to get to the QB... quickly.  The coaching staff has raved about Laws' dedication in the weight room this past offseason, and it's translating onto the football field.  Good for him.  Actually, good for us.  I think he should finally be a solid contributor this season.

Keenan Clayton - Second consecutive game with a big play.  This time he intercepted a screen pass.  I really like this kid.

Nate Allen - Everyone is going to remember Cedric Benson running him over, but Allen had really solid game in coverage, and got a little revenge on Benson with a big hit that jarred the ball loose (Benson's knee had already hit the ground).  I'm feeling much more confident at the FS position.

Ellis Hobbs - Nothing spectacular here, but he tackled when he had to and didn't give up any plays.  Starting to feel more comfortable with Hobbs as well.

Disliked (in no particular order)

The illegal formation penalties - Peters got pinched for two of them, and they got Winston Justice and Jeraill McCuller for one each.  One of them negated a TD pass from Kolb to Jason Avant.  They also got the Bengals for one.  It seems to be a point of emphasis for the officials this season.  Can't blame the players here on these, by the way.  When multiple players are committing the same technical-type foul, it's indicative that it hasn't been addressed in practice.  This is a classic example of the kind of sloppiness that the preseason games are good for.  OL coach Juan Castillo will tighten that up.

The interior OL - The Bengals basically set up camp in the Eagles' backfield and messed up anything the offense tried to do all night.

Kick coverage - 4 returns for 120 yards (a 30.0 average) including individual returns of 40 and 41 yards.  Last week they gave up 36.7 yards per return on 7 kickoffs against the Jags.  The extreme youth of this team has me concerned in this regard.  Bobby April has some work to do.

Moise Fokou - On the punt return before the Eagles' opening drive: "Holding, #53, half the distance to the goal, 1st down."  Instead of starting from the 20, the Eagles started from the 7 on their opening drive as a result, severely limiting their playbook.  Result: 3-and-out.  Last year, the Eagles had 26 special teams penalties, which was the 2nd most in the NFL.  Fokou had 3 of those, one of which negated an Ellis Hobbs kick return TD against Dallas.  His total penalty yardage, plus the return yardage he negated in 2009 totalled 129 yards.  He's not a rookie anymore.  The dumb penalties have to stop.

Jeremy Maclin - 2 fumbles.  He fumbled trying to reach the first down marker on 3rd down, which is somewhat forgivable, although it cost the Eagles an attempt at what would have been about a 45 yard FG attempt.  However, on the play he got hurt, he absorbed a big hit, didn't go down, realized that he was hurt, and basically dropped the football as if to say "Don't hit me again."  That's totally unforgivable.  Jeremy, you can't just drop the football if you're hurt.

[Note by JimmyK, 08/21/10 11:28 AM EDT ] Just watched it again.  He had the ball in his right arm when he was hit in his left arm, but it jarred the ball loose a bit.  It appears that he tried to regain control of the football by grabbing it with both hands, but only his right arm worked (he would say later that his left arm went numb), which made it look like he was just sort of throwing the ball out of bounds.  So it appears he didn't purposely drop the football.

Joselio Hanson - Got burned badly on a deep ball for the second straight week.  He was originally thought to be a stone cold lock to make this team, and I still think he will, but he's not playing well.  I understand that he's better covering players in the slot, but that excuse can only take him so far.  He's a cornerback, and it's his job to cover opposing receivers - He's not doing it.  Opposing coaching staffs are going to watch this film and look to get him on an island one-on-one.  If they're successful, God help us.  He's a liability right now, and needs to pick up his game.

Max Jean-Gilles - I already mentioned the entire interior OL, but I believe MJG deserves special attention for one particular play that just infuriated me.  The Eagles had a beautiful screen pass set up, with Jean-Gilles leading the way.  Jean-Gilles was bearing down on a defensive back he probably outweighed by about 150 pounds, and what does he do?  He dives at the defensive back's feet.  I don't want to sound too harsh, but that's garbage.

All 3 TE's - They were basically invisible.  Brent Celek had a catch, but I can't recall even seeing Clay Harbor or Cornelius Ingram.  Harbor's job is safe, but Ingram's employment on this roster is in serious jeopardy.