Jim Devlin is a dope

Share All sharing options for: Jim Devlin is a dope

There's a story by Tim McManus of Philadelphia Sports Daily that's beginning to pick up steam among the football community that Andy Reid ordered Eagles security to have a fan remove his Donovan McNabb jersey.  Deadspin and Pro Football Talk have already pounced on it, among other media outlets. The obvious angle here will be that the fan can wear whatever he wants, and that Reid is a jerk for having him remove his jersey.  The additional fuel to the fire is of course that it also happened to be a McNabb jersey.  The fan, 43-year-old Jim Devlin, commented "I’m a type of guy that likes to stir the pot a little bit." 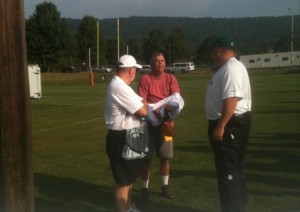 Allow me to shed a little light on the situation...

At camp, they have a "VIP area" where they bring small groups of fans to watch the practice in the same place the media guys are allowed to stand. It’s a privileged area. The VIP fans stand just a few yards away from the field. A couple weekends ago, I witnessed Reid scold one of the VIP fans that was being overly critical of an Eagle WR that dropped a pass. Reid warned that he was in the VIP area, and could just as easily be sent back to the masses.  The Eagles don't have to provide this level of access to their best fans, but they do. 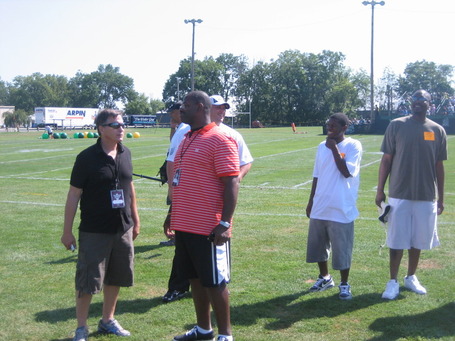 From the picture at the top right, I can clearly see that Devlin was in the VIP area. Frankly, I’m not sure how or why he’d be allowed on the field with a Redskins jersey in the first place.

In the picture in the middle right, here's a better idea of the VIP area. The 2 fans to the right with the orange stickers on their shirts are examples of "VIP fans." They are standing in an area about 15 yards wide in between 2 practice fields… See how well behaved they are, and how happy they are to be mingling among the players?

The picture at the bottom right shows a typical view a "VIP fan" would have of the action taking place on the field.

You don’t want your players getting distracted, even if they’re just playfully having a little give and take with an opposing fan, or whatever other distractions an opposing jersey might provide. The players are there to work, and I applaud Reid for stopping any potential distractions within his control.

If you wear a jersey of an opposing team when you’re supposed to be a VIP guest of the Eagles, that’s completely unacceptable. Good for Andy Reid. Devlin should have been immediately escorted back to the common area (which can be seen in the background of the third picture), but the Eagles were actually nice enough to simply have him remove the jersey.  Jim Devlin, I pronounce you a dope.  Glad I could clear that up.  Let's get back to actual football discussion.

[Note by JimmyK, 08/11/10 4:15 PM EDT ] A team spokesman denied Reid's involvement, saying Reid was not aware of Devlin's presence and that the guards were acting to calm the commotion created when reporters crowded around the fan while practice was in session.

Boy has this guy turned conciliatory.