This camp is going to be a lot of fun.  There are so many new faces, and watching camp is like an information overload on players we have never really seen at length.  McNabb is gone, Westbrook gone, 13 draft picks, trades, players returning from injury, blah blah blah.  So much to see.  Thanks to the credibility that JasonB has developed over the years and making BGN what it is today, I got to reap the benefits and take first crack at reviewing our 2010 Eagles.

I was at camp for both the morning and afternoon sessions yesterday, and the morning session today.  Keep in mind that it's just a couple days of practice, so don't put too much stock in this.  Having said that, here are the players that have impressed/depressed me in my 2 days at camp: 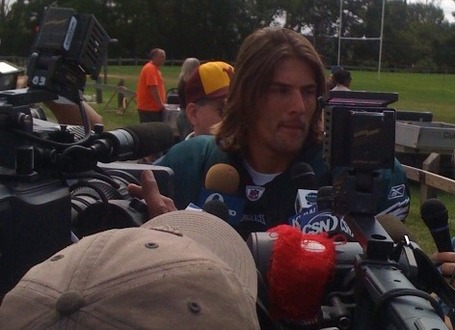 LeSean McCoy - If you attended camp the past 2 days and weren't thoroughly impressed with the way McCoy ran, you're blind, period.

Riley Cooper - He's big, he's strong, he's physical, and from what I witnessed of him I fully expect this kid to contribute this season.  Oh, and he's dreamy.

Keenan Clayton - He's everywhere.  I just kept noticing him... again and again... and again and again.  He was constantly around the ball.  It didn't hurt that he has run with the 2's, the 3's, and even at times the 1's, not to mention as the gunner on punt coverage teams.  The Eagles are clearly looking for the role that he will fill, and they're giving him ample time on the field to figure that out.

Hank Baskett - Hank was the camp darling his rookie year, and he's having another strong camp this year.  The thing that has impressed me about Hank is that he's constantly trying to get better.  On several occasions during the one-on-one drills, he was asking the corners questions after his reps.  Like that attitude.

Stewart Bradley - He didn't practice today, but he was outstanding yesterday.  He had a nice interception, he was making tackles all over the field, he was locking down Brent Celek in coverage, he was in a word, the man.  If I didn't follow the Eagles and someone were to ask me to pick out a player on the team that I thought tore his ACL last year, Bradley would be among the last 5 players I would guess.  For such a big guy, he's moving around fluidly and making plays - He's back.

Charles Scott - He a load.  I'm pulling for him.  I've read reports that he has hands of stone.  Unfortunately, I didn't see him get too many opportunities to catch passes in live action, but that's the word, and Andy doesn't like to keep backs that don't contribute in the passing game.  However, on the limited number of carries I've seen him get, he drags defenders.  He's going to get a ton of work in the second half of preseason games, and if he runs with the power he showed this weekend, he'll find himself on this roster.

DeSean Jackson - Have to mention him.  Sorry, I know... Yawn. Next.

Jeff Owens - He gets low, and makes himself difficult to drive back.  Difficult to see the action in the middle of the line from my vantage point, but I did notice Owens routinely getting penetration into the backfield and messing up the offensive rhythm.  He's someone to watch during the preseason as well.

Winston Justice - I watched Winston battle Brandon Graham, and Winston was winning the majority of those battles.  Good to see him keeping up the good work after a breakthrough season.

Mike Kafka - He's a project, but still... He was bad.  He seems to have a nice accurate ball if he keeps it within 15-20 yards, but it gets dicey when he extends that.  Obviously, to be an NFL QB, you better have a deeper accuracy range of more than 20 yards.

Cornelius Ingram - I really, really wanted Ingram to do well this weekend.  But he was invisible.

J.J. Arrington - Looks heavy and I don't see any sign of quickness.  Very much a longshot to make this team.

Nick Cole - I'll just re-post what I wrote on the running diary...

I've been watching to see how Nick Cole looks snapping the ball in shotgun situations.  It's not good.  You don't want your center firing fastballs back to the QB, but you do want a crisp snap that the QB gets in his hands quickly so he can maximize his time to look downfield and read the defense.  Every fraction of a second counts.  Cole's snaps in the shotgun are not crisp.  Kolb is often having to reach for them slightly, which is not ideal, and is eating up those all-important fractions of a second.  I could certainly be wrong here, but it does not appear to me that this is something Cole has worked on in the offseason.

Chad Hall - I know he has his share of fans here, but from what I've seen, he's a longshot for this team.  Will he catch on elsewhere if he's cut?  Sure, I think he's got a good shot somewhere else.  The problem with Hall is that this offense is already flush with smallish speed guys.  I just don't see where he finds a niche as a contributor.  Would I feel confident that he can cover kicks/punts and consistently make tackles?  No.  In the return game, is he anything more than backup punt/kick returner?  To be determined, but with 2 of the best in the business handling those duties, I don't think so.  As a 6th wide receiver, does he have one attribute that's better than at least 2 other receivers on this team?  From what I saw, no, he doesn't.