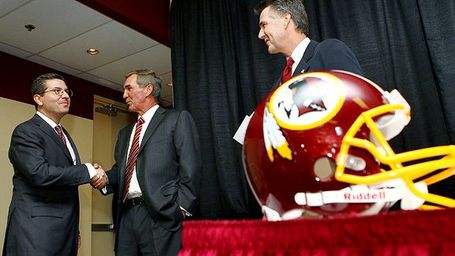 The Redskins improved their 2010 roster this offseason with the trade acquisitions of Donovan McNabb and Jammal Brown.  I don't think there's really any debate that they should significantly improve upon their 4-12 record of last season.  John Clayton, for one, thinks the Redskins are the co-favorites to win the NFC East.  Vic Carucci of nfl.com thinks the Redskins are the most improved team in the league.  Even computer simulations are on the Redskins bandwagon, as they've determined that if you were to plug in McNabb on the 2009 Skins they would have almost doubled their win total.

All of that is fine and good.  The objective of the offseason is to improve your team, is it not?  And yet, even though I would be the first to agree that they're better, I'm extremely skeptical of the long-term benefits of their offseason.

Daniel Snyder bought the Redskins in May of 1999, meaning that the first offseason that his influence over the major personnel decisions began after the 1999 season.  Since the end of that 1999 season, the Redskins have gone 70-90 (.438 winning percentage), have made the playoffs only twice, and have won just a single playoff game.  When people think Daniel Snyder, the obvious first thing that jumps into people's minds is the reckless spending on overpriced free agent signings (and we'll get to those in a second).  So far in Snyder's reign, it's not working.

Apparently, I'm told this year is different.  With the "dream team" of Mike Shanahan and Bruce Allen running the show, Daniel Snyder can now be more hands-off, and can even "sleep at night."  Well, as the title of this piece already suggests, I don't buy it.  From what I've seen of this new regime so far, it looks like the same pattern of immediate gratification in the form of trading away youth for aging veterans.  It's an ugly cycle of filling in holes by trading your draft picks, staying old, and never developing a young core of talent to build around.

Let's start with a history of transactions during Dan Snyder era...

First, just as a reference, let's get the most notable free agent signings out of the way... 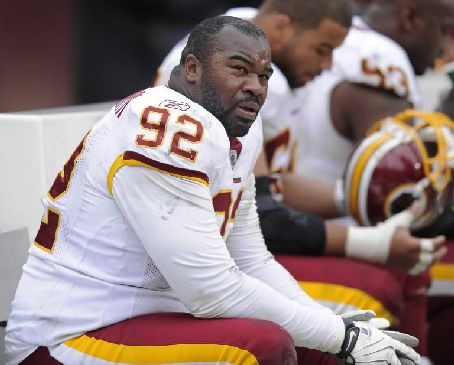 2001 - In Marty Schottenheimer's only year as the Redskins' head coach, the Redskins opt to lick their wounds after the disaster free agent class of 2000.

2002 - In Steve Spurrier's first year, the Redskins overpay for Jeremiah Trotter and Renaldo Wynn, take a more modest chance on Jessie Armstead, and a couple of Spurrier's former WR's from Florida in Reidel Anthoy and Jacquez Green (not listed) to smaller contracts.

2003 -This was the year of the Jetskins, because the Redskins signed away 4 Jets, which included Randy Thomas, Lavenanues Coles, Chad Morton, and John Hall.  Coles and Morton were restricted free agents, so we'll get to them in the "Redskins Trades" section, since they had to part with picks to acquire them.  Matt Bowen was also a restricted free agent acquired from the Packers in 2003.

2004 - Lot's of bad trades this year (I'll get to those below), and basically a new defense via free agency.  The Redskins signed Shawn Springs, Cornelius Griffin, Marcus Washington, and Phillip Daniels.  Unfortunately, after a long, annoying search, I couldn't find Daniels' contract details.

2005 - Snyder once again signs a player (this time Rabach) on the first day of free agency, although this year is much calmer than most.

Adam Archuleta - 6 year, $30 million (at the time making him the highest paid safety ever)

2007 - One great signing (Fletcher), and a major overpay to a mediocre corner with little value after the Minnesota hooker boat scandal.

2008 - A terrible trade for Jason Taylor aside, nothing of note whatsoever during the offseason, although they signed Deangelo Hall to a one-year deal after he was cut by the Raiders during the season.  I'll include his re-signing in the 2009 column.

2009- Disaster.  The Skins give an insane amount of money to a head case, $55 million to a guy that 2 teams basically gave up on in one calendar year, and $26.5 million to a mediocre guard. 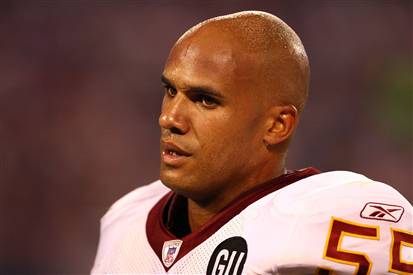 2000 - So Dan Snyder, you just signed 4 over the hill vets in Deion Sanders, Bruce Smith, Jeff George, and Mark Carrier.  What are you gonna do now?  "I'm going to trade for Rodney Peete!"

Rodney Peete - Acquired from the Eagles for a 6th round pick.  Wait (gasp!), the Eagles traded a QB within the division?!?

2003 - The Redskins went crazy in the restricted free agency period, giving away 3 picks as compensation for signing away restricted free agents, and also trading fro Trung Canidate.  The result - They had 3 draft picks in 2003 - Taylor Jacobs, Derrick Dockery, and Gibran Hamdan.  Woohooooo!

Laveranues Coles - Technically a restricted free agent, the Redskins signed away Coles from the Jets for 7 years, $35 million, and they had to give the Jets their 1st round pick (13th overall) as compensation.

Trung Canidate - Acquired from the Rams for a 4th round pick and G David Loverne.

Chad Morton - Also technically a restricted free agent, the Redskins signed away Morton from the Jets for 5 years, $8 million, and they had to give the Jets a 5th round pick as compensation.

Matt Bowen - Yet another restricted free agent, Bowen signed with the Redskins from the Packers.  The Skins gave up a 6th round pick as compensation.

2004 - The Redskins wheel and deal like crazy, with a horrible trade/signing of Mark Brunell included...

Clinton Portis - The Redskins trade a 2nd round pick and Champ Bailey (at the time considered the best CB in the game) for Portis.  They then sign Portis to an 8 year, $50.5 million contract.  I've heard a lot of arguments why this was a good trade for the Redskins, but I just don't see it.

Mark Brunell - Acquired from the Jaguars for a 3rd round pick.  they then signed him to a 7 year contract worth more than $43 million.  Ouch.

James Thrash - Acquired from the Eagles for a 2005 5th round pick.  Wait (gasp!), the Eagles trading a player within the division... Again?!?

T.J. Duckett - The Redskins acquire T.J. Duckett in a 3-team deal.  They give up a 3rd round pick.

Erasmus James - Acquired from the Vikings for a 7th round pick.

So what happens when you continually trade your draft picks for older players?  Well, in a nutshell, as noted above you stay old and never build a young nucleus around which your team can build.

Here's a chart that shows the number of draft picks made by the Redskins, the league average, and a team that values draft picks, the Eagles...

Note that the Eagles' picks since 2000 outnumber the Redskins' picks by 27.  Twenty-seven more picks since 2000!  Using the league average of 8 picks per team (their own 7 picks, plus 32 compensatory picks awarded each year), the Redskins have had the equivalent of 3.375 less full drafts than the Eagles.  In my opinion, that's staggering.

So what did the Redskins do this year that was so different? 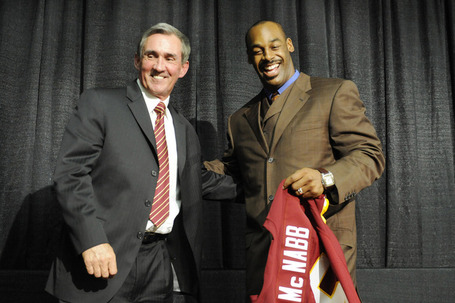 Jammal Brown - Acquired from the Saints for whichever of the 3rd round pick or the 4th round pick that's left over from the Eagles' deal.

Adam Carriker - Acquired for a 5th round pick from the Rams.

Now, you can look at any one of those 3 trades in a vacuum in say... Hmmm... decent trade there.  Shanahan and Allen really know what they're doing.  And if they're successful, maybe the Redskins will win 7, 8, 9 or even 10 games this year.

But next offseason, the already old Redskins will be yet another year older, new holes will emerge, and without a full plate of draft picks... yet again... it'll be time to break out the checkbook for some more good old fashioned Snyder splurging.  All I see is the same cycle repeating itself once again.  No young core around which to build; trade away youth or overpay for aging vets.