Share All sharing options for: Kevin Kolb Kills Rattlesnakes With His Boot

We already knew that Eagles' QB Kevin Kolb hunted wild hogs with a knife before he got into the NFL... Now, while on a recent bass fishing trip with local writer/radio host Anthony Gargano he recounted this story of the time he and his future wife were out for a walk and they came upon a rattlesnake. Safe to say, things didn't end well for said rattlesnake.

The quarterback slipped off one of his boots – this is why real outdoorsmen wear them – attached it to the end of a stick that he picked from the ground and dangled it in front of the hissing western diamondback. The rattlesnake struck the boot. The boot danced and the snake struck again. And again. Nearly 10 times the snake attacked the boot. Until, finally, the snake recoiled and lay lifeless on the ground. What do you know? It worked. That show on the Discovery Channel reported that a rattlesnake will play dead when prey doesn't fall victim to its spectacular bite. So the quarterback reached down and plucked the rattlesnake by its neck and held it out. With his other hand, he retrieved the .38 caliber handgun fastened to his hip and fired a round into the rattler's head. He then used his favorite pocketknife to cut off the rattles. Thirteen of them!

Kolb went on to say that carrying around the rattles of a rattlesnake is good luck. Given how his life has went since then... how can  you argue?

Back to the story though... the two things that can't help but jump out at me is that at 17 years old Kevin Kolb wore a .38 caliber handgun as a sidearm and knew exactly what to do when attacked by a rattlesnake. Oh and he carries around part of its carcass as a good luck charm. This man is a bad ass.

Be sure to check out the rest of Gargano's feature on Kolb. There's some really interesting stuff in there. Also check out andyreidswaistlne's photoshop of the story after the jump. 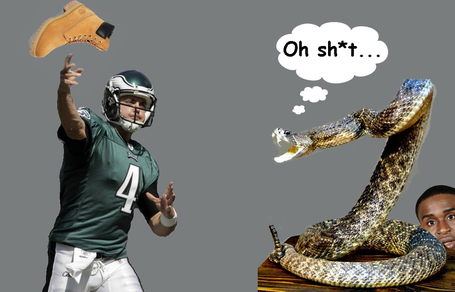