Who is this year's Brent Celek?

Share All sharing options for: Who is this year's Brent Celek?

There's the theory that in an NFL player's 3rd year in the league, they "stop thinking," and instead "begin to just react," which enables them to start playing at a high level. It's when "the light bulb comes on" for some players. It's the reason you hear people say "You can't judge a draft until they've played 3 years." Last year, that player was Brent Celek, as he caught 76 passes for 971 yards and 8 TD's, and was unfortunately snubbed for a trip to the Pro Bowl.

In 2008, despite flashing talent, Celek was stuck behind L.J. Smith on the depth chart for the bulk of the season. Every time L.J. dropped a pass or went to the ground without even a hint of trying to break a tackle, my phone would ring with my father screaming "Get that CEE-lick guy in there!" He now pronounces it correctly.

Eventually in '08, Celek got his chance in the playoffs and in 3 games, he caught 19 passes for 151 yards and 3 TD's, including a 10 catch, 83 yard, 2 TD performance in the NFC Championship against the Cardinals. The Eagles felt comfortable with Celek as their guy at TE going into the 2009 season, and Celek broke out.

After the jump, we turn our attention to the 2008 draft, and we look at the candidates for this year's "3rd year breakout player."

Of the Eagles 10 selections in 2008, 4 are no longer with the team. Quick updates on those players... 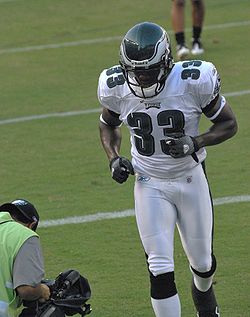 - Bryan Smith landed with the Jaguars, but is done for the season with an ACL tear. Can you call a 3rd round pick a bust? If so, Smith qualifies.

- The Eagles were able to draft Jack Ikegwuonu, formerly considered a 1st round talent, in the 4th round because he was recovering from an ACL tear. Nice idea, didn't pan out. I'll be nice and say he's currently a free agent.

- Seattle signed Mike Gibson off the Eagles practice squad last season, and he saw some game action at the end of 2009. He'll be fighting for a job this preseason with the Seahawks.

- Kansas City plucked Studebaker off the Eagles practice squad in '08, and in his first start in the NFL ('09 vs. the Steelers), Studebaker picked off Ben Roethlisberger twice, returning one of those picks 94 yards to the Steeler 8 yard line. The Chiefs won that game in OT, in a huge upset.

So who is this year's Brent Celek?

Trevor Laws - Certainly a disappointment so far, Laws had 22 career tackles in 27 NFL games. He didn't suit up in the Eagles' final 4 games last season.

DeSean Jackson - Pretty sure he already "broke out," unless he can dramatically improve on the bar he set last season, which probably isn't going to happen.

Mike McGlynn - Here's an interesting one. There's no better opportunity for McGlynn than right now, with Jamaal Jackson recovering from an ACL tear. Can he beat out Nick Cole in camp?

Quintin Demps - Showed some really solid promise his rookie season (a few bonehead plays aside), got annoyed that the Eagles didn't hand him the starting FS job on a platter last season, barely saw any action in '09, watched as the Eagles signed Marlin Jackson as a free agent and drafted Nate Allen with the 37th overall pick, and is now vowing that he has matured.

Alex Hall - Hall was part of the trade that sent Sheldon Brown and Chris Gocong to the Browns. He'll likely be competing in camp as a SAM linebacker.