Mike Kafka is rooting for the Blackhawks

Share All sharing options for: Mike Kafka is rooting for the Blackhawks

In case you didn't know... the Philadelphia Flyers are about to square off against the Chicago Blackhawks in the Stanley Cup finals. Philadelphia is understandably "Flyered up." Except one of the newer Philadelphians, Eagles QB Mike Kafka.

"You know what, Chicago boy, I’m rooting for the ‘Hawks," Kafka said after practice Wednesday.

G Cobb responded to the comment with a whole article talking about what a mistake the kid had made by admitting his hockey allegiance. "Many of them will never forgive him for rooting against the Flyers if the Flyboys are beaten by the Blackhawks in this year’s NHL Finals." he said.

Is he serious? People in town will never forgive the kid because he's rooting for his hometown team? Honestly, I think it would be far worse if he told everyone that despite the fact that he was raised in Chicago and had only been in Philly for a few weeks that he was switching his alliances to the Flyers. If he did that, I'd just assume he was lying. His only obligation is to root for the Philadelphia Eagles. No one is going to hold a career long grudge against the guy for pulling for his boyhood hockey team.

I doubt people in Boston will forever hate Rasheed Wallace for being honest about his hockey loyalty. 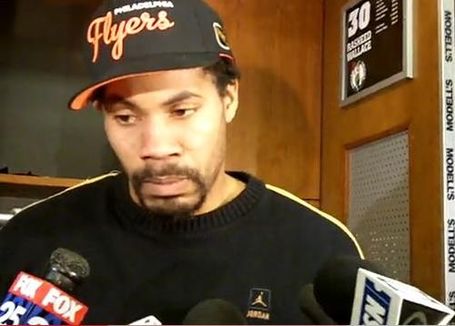