The value of offensive consistency

Share All sharing options for: The value of offensive consistency

As announced previously in this space, XFINITY from Comcast has generously agreed to support the best NFL community around -- us!  As part of that effort, between now and the end of the 2010 NFL season XFINITY will be sponsoring a variety of special editorial and interactive features on our site.

A big complaint about the Philadelphia Eagles offense last year(and in years prior) has been their "all or nothing" nature. That certainly did seem to be the case in 2009 with the team scoring over 40 twice yet also under 10 twice. Their highest score of the year was 45 and their lowest... zero. Since the offseason is upon us, I figured it would be a good time to try and delve into some research topics. I do have a stats and economics background and Jimmy K is strong with that stuff as well so hopefully this offseason we'll drop some chart based knowledge. 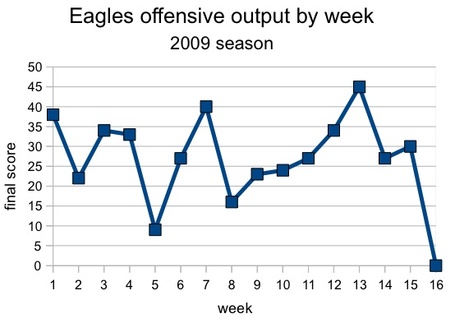 Just how inconsistent are the Eagles. Is there a strong link between between offensive consistency and winning? For this first part, I took the average score of the top 10 offenses in the NFL. The 10 offenses in the NFL last year(as far as points/game) were as follows: Saints, Vikings, Packers, Chargers, Eagles, Patriots, Colts, Giants, Ravens and Texans.

First, I recalculated a few of their points per game averages. The Colts and Saints both rested starters in some of the final weeks of the season, so those scores wouldn't tell us anything about their consistency. Then, I calculated the number of deviations from the teams' mean score and came up with a percentage of variation. Simply put, on a weekly basis how much does a team score above or below its season average?

Here's the top 10 offenses re-ranked in terms of consistency. The higher the percentage, the less consistent the offense was. For example, a team with a ppg of 30 and zero percent variation will have scored exactly 30 points every week.

More analysis after the jump.

Of the top 5 offenses in terms of consistency, only one failed to reach the second round of the playoffs last year. That team was the Packers, who lost an overtime game on the road in which they scored 45 points. Three of the top 5 most consistent offenses made their respective conference championships. The fourth team in the title games was the Jets, whose offensive consistency was 39%.

The Ravens did manage to win a playoff game despite being next to last in consistency amongst the top 10 offenses, but that also explained their downfall. In the wildcard round they put up 33 points against the Patriots, but the following week they managed just three points against the Colts.

What does it all mean? The Eagles can score points on a given Sunday as well as any team in the NFL, but they can't do it on a consistent basis. When you rank all teams by points per game, the Eagles come in at #5. When you rank all teams by offensive consistency, they drop to #15. That's the largest difference of any team in football. It does lend some credence to the idea that the Eagles offense beat up on bad teams, but struggled against better teams. Of the Eagles top five offensive performances this year, only one came against a team with a winning record. That was against the 9-7 Falcons, who happened to be without 5 of their offensive starters. The game also featured a defensive touchdown. Of the Eagles 5 worst offensive performances... all but one(Raiders) came against playoff teams. There isn't a wide margin between the Eagles and the elite offenses in terms of points scored... but there is a significant margin in how consistently they score those points.

If this next stat doesn't illustrate the problem of an inconsistent scoring team I don't know what will... The Eagles averaged a two touchdown margin in their 11 wins this year, but 3 of their 5 losses were within one score.

There's no doubt that the Eagles offense needs to be more consistent. A reliable running attack would certainly help as the Dolphins, Jets, & Ravens prove. The running game is less prone to boom/bust games than the passing game is. But in the end, the job of making the Eagles offense more consistent is going to fall primarily on the shoulders of Kevin Kolb. If he can avoid the games McNabb had where he just couldn't get on target and Andy Reid "kept firing" then the offense should avoid those games like Oakland last year and Cincy the year before.

For the most part, the lower scoring teams are inconsistent and the higher scoring teams are more consistent. There aren't huge differences in these two ranks... However, when we do rank all the teams by consistency a few interesting names appear at the top that aren't there in the points per game rank. The Jets were the 17th ranked teams in terms of ppg, but they were 10th in consistency and they made the AFC title game. The Steelers are another team who jump up, and they won 9 games. It's also curious to see the teams who rank highly in scoring, but fall in the consistency rank. The Eagles, Giants, & Patriots. All teams whose seasons ended on very sour notes and no playoff wins among them.

Below is the full rank of the most consistent scoring teams in the NFL. 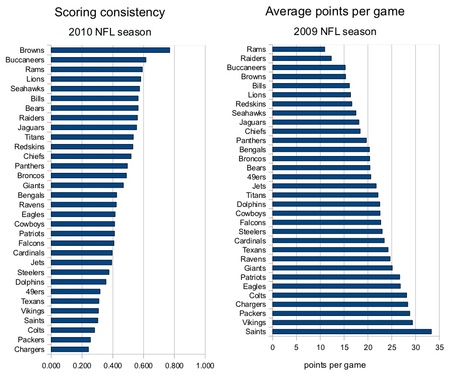 XFINITY from Comcast is a proud supporter of Bleeding Green Nation. You’ll get your Eagles games as a part of over 120 NFL games XFINITY provides in HD, as well as On Demand game recaps from every NFL game every week, faster Internet speeds, and stunning HD. With XFINITY and NFL RedZone, you get every touchdown from every game every Sunday afternoon! Call 1-800-XFINITY or visit http://www.xfinity.com.