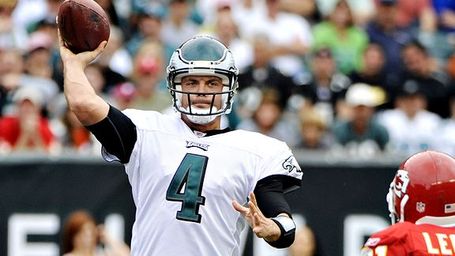 Last week we analyzed every throw Kevin Kolb made in the Eagles Week 2 loss vs. the Saints last year.  This time we'll examine every throw he made against the Chiefs in Week 3.  Let's just get right to it...

- 1st and 10 - On the first play against the Saints, Reid gave Kolb an easy look as he sent 3 receivers out on 5-yard button hooks, with his first option being Brent Celek.   This week is no different, as he sends 3 receivers out on 5-yards routes, with Celek again being the first option.  Kolb hits Celek with an easy pass for a gain of 8.  The Eagles punt after 2 plays not involving Kolb come up short of a first down.  Note - These are the kinds of tendencies coaches look for when studying tape.  If I'm Green Bay, I'm looking to jump a 5 yard route for a big play on my first defensive play in Week 1 this year.  Conversely, if I'm the Eagles, I'm maybe thinking about starting off the season with a double move.

- 1st and 10 - Effective blitz here by the Chiefs.  Kolb tried to hit his outlet (McCoy) in the flat, but the blitzing Chiefs defender was able to get a hand on the ball.

- 2nd and 10 - Kolb hits Maclin on a short, easy pass.  If you'll note, the announcer mentions that Kolb throws off his back foot here (and he's right), which is somewhat of a theme in this game.  It took Eli Manning years to get over that bad habit (one that he hasn't fully cured).  Kolb will have to fix this - He needs to stay balanced, and step into his throws.  It's not as if he had a huge pass rush in his face on this throw.

- 3rd and 6 - Kolb hits Avant in stride on a little drag route and gives Avant the opportunity to pick up some yards after the catch.  But note again... Kolb unnecessarily throws off his back... Accurately, of course, but back foot nevertheless.

- 2nd and goal from the 5 - After a couple long McCoy runs to get into the red zone, Kolb is split out wide.  Knowing that Kolb is also an outstanding receiver, the defense is so concerned with him, that McCoy runs it in from the Wildcat formation.  OK, so not really... just left this in to show the result of the drive.

- 1st and 10 - As Jackson finds an opening in the Chiefs' zone, Kolb fires one to a spot where the linebacker to the right of Jackson can't get a hand on it, hitting Jackson almost in stride for a gain of 43.  Really nice pass here - If Kolb leads Jackson perfectly, the linebacker maybe gets a hand on it, and if he throws a touch pass over the top of the linebacker, it gives the defense more time to make a play on Jackson.  Very well done.

1st and goal from the 9 - Kolb rifles a pass in between 3 Chiefs defenders and finds Brent Celek, who gets rocked on the play.  I mentioned early in the last review of the Saints game that Kolb-to-Celek was a recurring theme.  Well, it'll be another recurring theme in this review as well.  I'll repeat, move Celek way up your fantasy football draft boards this year - He and Kolb have some clear chemistry.

3rd and goal from the 1 - Kolb shows off his wheels on this incredible scramble for the ages on this amazing 1-yard TD run.

- 1st and 10 - Kolb gets great protection and moves to his right to extend the play.  Finding nothing downfield (presumably), he dumps it off to Celek, who again gets rocked.  Gain of 1.

- 3rd and 7 - The Chiefs blitz, Kolb makes a quick read and gets the ball out quickly to Celek.  Nice read/pickup on 3rd and long.  Well done.

- 1st and 10 - Back foot again.  This is actually a nice read by Kolb.  He recognized the one-on-one coverage on Celek (who was lined up wide) with a CB (Brandon Carr) on him.  Carr just makes a nice play to break it up.

- 2nd and 10 - The Eagles were extremely lucky here - 9 times out of 10 this is a pick.  It's tough to know who to blame here.  Obviously, this is a miscommunication between Kolb and Reggie Brown, as opposed to a bad throw.  Should Brown have cut off his route because the Chiefs were blitzing?  Was Kolb wrong in expecting Brown to cut off his route?  Tough to know on these situations, so I'll just blame them both.  This was Kolb's one major mistake in this game, and miscommunications like this will assuredly occur this year with our extremely young offensive playmakers.

- 3rd and 10 - With presumably nothing open downfield, Kolb checks down to McCoy underneath, who makes a move and gets 9, leaving the Eagles with a decision on 4th and 1.

- 4th and 1 - I said this in the last review and I'll say it again... I HATE... that's H-A-T-E these rollouts where the Eagles essentially cut the field in half for no good reason.  Marty and Andy... The strength of your skill position players is their speed.  Please stop giving them less room to utilize it.  Awful play call.

Drive #5
- 1st and 10 - Kolb gets rid of the ball quickly and threads the needle between 2 Chiefs defenders to Jackson, who does the rest.  This TD is mostly due to the great speed/quickness of Jackson, but it's worth noting that if you get the ball in the hands of your playmakers quickly, good things happen.
Drive #6
- 3rd and 9 - Kolb recognizes the one-on-one mismatch of Corey Mays on Celek, and hits in stride for a 1st down conversion on 3rd and long.  Nice read, nice pass, well done.
- 1st and 10 - Kolb hits Brown on a little out.  4 yard gain on first down.
- 3rd and 4 - Interesting play here - As his protection breaks down, Kolb steps up nicely and it appears that he spots either Jackson or Maclin (Jackson, I think) running across the field short of the first down with a linebacker and safety in pursuit.  Kolb doesn't like it, and eats the sack.  A Chiefs face mask penalty in the secondary, however, extends the drive.  If Kolb saw the flag in the secondary (which is almost always going to be on the defense), the decision to not risk getting Jackson killed by a linebacker is an outstanding, heady decision.
- 2nd and 10 - Play action - Kolb hits Celek in stride again for a nice 9 yard pickup on 2nd and long.  Nice pass - This is now Celek's 6th reception.  But Brent, I love you and all, but please stop with the lame, tired first down signal.

- 2nd and 5 - Under a heavy rush, Kolb retreats to buy time for Weaver to clear into the flat and throws a strike to him for a first down.  Back foot throw again, but this time it's appropriate.
- 1st and 10 - This was the best catch in the history of the NFL by Avant, but the CBS camera crew missed it.  4 yard gain, apparently.

- 2nd and 6 - I believe Kolb is throwing to a spot here again, kind of the same way he did to Jackson on the 43 yard catch and run on the 3rd drive, where either Maclin will catch it, or nobody will catch it.  Unfortunately, he nearly gets Maclin killed on the play.  Probably a bad decision here.
- 3rd and 6 - I read somewhere that Jason Avant had 0 drops last year.  Well apparently, that's not true.  Nice pass by Kolb, should have been a 1st down - Eagles settle for 3.
Drive #7
- 1st and 10 - Play action - Steps up into the pocket nicely, and fires another strike to Jackson.  Ho hum.
- 3rd and 5 - Of the 2 games of tape I've studied, this is the most encouraging pass I saw.  This is a rocket delivered right on the money to Maclin.  If you have any questions about Kolb's arm strength, please refer to this throw.  He doesn't have the arm that McNabb has, and neither does 95% of the other QB's across the league... but Kolb is no slouch in that regard.

- 3rd and 5 - Quick slant to Jackson, maybe should have put this on Jackson's back shoulder, but it's complete as Jackson does a good job hanging on with a defender all over him.

- 2nd and 7 - Kolb takes the checkdown to Jackson, setting up a short 3rd and 1, which the Eagles don't convert.  Punt.

Kolb spends the rest of the day on the sidelines, and Garcia comes in to mop up.  Final numbers on the day...

My thoughts (and I'll keep it short and sweet)...

Bad defense, big numbers... But the throws are there.  Based on the film from the Saints and Chiefs game last year, this kid is a talent and a legitimate starting NFL QB.