A look inside the NFL league office

Share All sharing options for: A look inside the NFL league office

Friday, prior to day two of the 2010 NFL draft kicking off, a few of my fellow SBNation bloggers and I had the opportunity to tour the NFL league offices here in New York City. For someone who has followed the NFL for so long, it truly was a treat to get a rare glimpse inside the actual nerve center of the league.

From the minute you step out of the elevator, there's little doubt as to where you are. The lobby, and really the whole building, is filled with old NFL memorabilia. Tom Landry's actual hat, Franco Harris' jersey from the Immaculate Reception, an old Redskins jersey from the 1930s(it really was little more than a t-shirt), are all just some of the things on display when you first walk in. Everything in the offices is reverential to the game and its history. You walk down the hallway from one department to another and there's a giant timeline of every superbowl on one wall. All the conference rooms are named after NFL royalty like Bill Walsh or Paul Brown... One day I need to have a meeting in the Bill Walsh conference room BTW. You walk up the stairwells to the upper levels that feature giant prints of past NFL stars. There's old photos of guys like Jim Thorpe & Jim Brown amongst the offices and cubicles. The whole place is, in many ways, a shrine to the game.

At one point we came upon a display that had every program from every Superbowl ever played in it. Very cool. There was another display with a cell phone faceplate for every team... ok maybe that one is not so exciting.

A great thing about the experience was how obvious it is that everyone in the building loves the game. Every office or cubicle that someone occupies is covered in logos & memorabilia from their favorite team. People don't just want to display it all, they're encouraged and people from all over the country represent just about every team in the NFL. Beyond that though, everyone wants to talk football. We'd be introduced to various people around the office and every single one would want to share their thoughts on the draft or ask what we thought about where a certain guy might go or who a certain team might pick. Honestly, when the tour ended I left the building thinking it must be the greatest place in the world to work. You get to cover your office in Eagles gear and talk football all day? Where can I send my resume?

One of the highlights of the tour that a real NFL geek would love was the replay center where every game every Sunday is fed into. The room itself looks like the bridge of the Star Trek Enterprise with control panels and monitors everywhere. When a challenge flag is thrown, they project the game on a huge floor to ceiling movie screen and actually use xbox 360 controllers to go over the play. You'll probably never have this setup your house because from what I'm told, it's a completely custom setup designed for the NFL. While the room was obviously empty the day we were there, you can sense what a frenetic place it must be on gamedays.

Overall, it was an exciting experience to see behind the curtain of the league we all follow and love. While the office space itself was nice, the lasting impression for me was the people. There's no doubt that the NFL is a billion dollar business, they're out to make money, and we are all their customers... but it's great to know that the people running it really are fans like us. It's easy to be cynical about sports these days and I can't deny that in a lot of instances that the leagues and players and earned some of that cynicism... but as I walked out of that building I thought to myself that as long as the league continues to be run by fans it's in good hands. Because in the end, all those people want to do is watch football, which is something we all have in common. 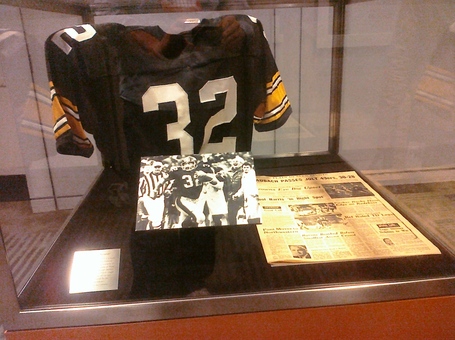 The jersey Franco Harris wore during the "Immaculate Reception" play.