For the second straight year BGN will be live covering the draft from Radio City Music Hall in New York City. There will actually be a whole team of us SBNation guys this time covering all corners of the draft. Through the day I'll certainly do my best to point you to all of their work. Of course, I'll be right here keeping you up to date on anything I hear about the Eagles. I also strongly suggest you follow me on twitter, since I'll be updating that constantly as I walk around.

I wanted to spend a little time talking about what the draft is like as an event. First, it's unlike anything you'll ever go to because there are so many fans of so many different teams there. When you go to an Eagles game, everyone is football obsessed... But imagine if they were all fans of other teams? It really is amazing to look down from the top of Radio City and see pretty much everyone wearing a jersey and every NFL team represented. The conversations that go on amongst fans alone makes it worth going.

The atmosphere for the first round really is electric and the crowd is on edge for every pick. No fans are louder however, than Jets fans. They absolutely own that place. They go crazy(good and bad) for Jets picks and boo most everyone else, mostly the Patriots though. That's another thing to remember... for 10 years I've listened to people talk about McNabb getting booed at the draft and the fact is that everyone gets booed. Jets fans boo everyone and most of the rest of the crowd joins in. When Matt Stafford was standing on stage last year posing with his jersey, the crowd chanted "over-rated" at him. That's just the nature of the draft.

While all teams have fans there, the Jets, Eagles, Patriots, Steelers, and Giants are the most well represented for obvious reasons. Oddly enough though, the Giants might be the least of that bunch.

Last year a big group of Eagles, Giants, and Jets fans found some common ground in the fact that they were all from New Jersey and there was a surprising amount of big name players which hailed from the Garden State. The first round alone had guys like Eugene Monroe, Knowshon Moreno, Kenny Britt, & Donald Brown. After each guy from NJ was picked, this big group would start chanting "Jersey Football!" They did this both days of the draft! Often, that's how I would find out a player was from Jersey. The Jersey Football group was even there to cheer Mike Teel from Rutgers when he was taken by the Seahawks. He might have got the biggest cheer of day two. It was really just another one of those awesome examples of football geekery that happens at the draft.

After the first round, the atmosphere starts to die down a bit. By the time later rounds roll around, the place starts to empty out and get a lot more quiet. 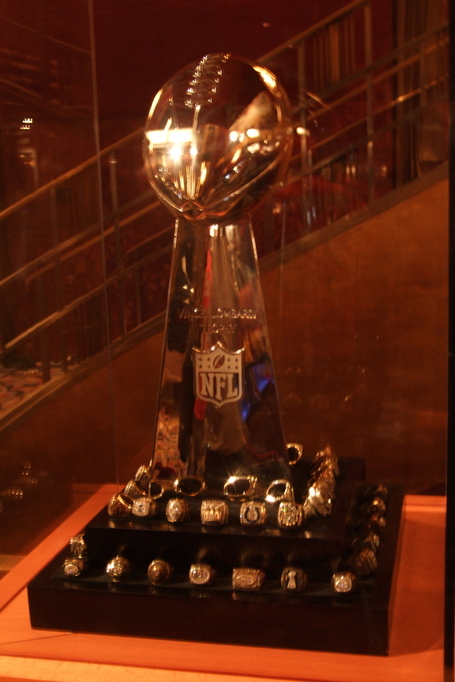 That's a good time to walk around and take in some of the stuff going on in the lobby and elsewhere. Last year, there was a big display commemorating the 50th anniversary of the AFC. They had a big timeline on the wall with the history of the AFL. There were jerseys and helmets from all the original teams and some old artifacts from that era.

The Lombardi trophy is on the display, which is pretty awesome. They keep that under glass with a security guard next to it all times... There was also a booth where fans could sit in and basically pretend to broadcast a game.

After each pick, the top players get taken downstairs to an interview room where media can ask them questions... For me, this was the most boring part of the draft. I'm sure that sounds weird and you're asking how it could be uninteresting to stand 6 feet from a top 10 pick and ask him questions... but the fact is that these kids have been coached to answer any question with short cliches. They show very little personality, they say nothing, and no one really asks them anything that interesting. I get why agents do it, but I really wish they'd let these guys show some type of personality...

While the players are kind of a bore, it can be interesting to talk to guys in the media. All the big ESPN talking heads are there and even some of the more minor guys. Last year, I ran into Howie Schwab from that "Stump the Schwab" show. He really is an ESPN producer who helps out the guys on camera. Speaking of the guys on camera, it is amazing that they almost never leave their stage. The only guy I ever saw walking around from the ESPN crew was Chris Mortenson. The rest of those guys just sit up there all day on camera, which really can't be easy.

That said, I do have one criticism of the media. A lot of those guys(cough print media) seem miserable to be there, which I think is a shame. For someone like me and Jon Bena from MHR(our Broncos blog), it was a thrill to sit in the media pit and cover the draft. Maybe we'd feel different if we did it for 20 years, but I still think it's a privilege to be involved in an event like that. Maybe that's the disconnect between being a fan and a member of the media. I'm still there to cover the event, but I'm having a blast doing it.

One of the interesting things later on the second day last year was the buzz about who might be "Mr Irrelevant," which is the title given to the final guy drafted. There's actually an organization that comes to the draft strictly for Mr Irrelevant. Last year, they were handing out folders full of information about past Mr Irrelvants and with all the events they hold for the guy through the year. Yes, they actually hold events for whoever gets picked last in the draft. These aren't people from the NFL either, it's just a group of fans. Mister Irrelevant even gets his name announced from the podium, which no one else after the first two rounds gets.

Anyone have any questions about the draft or what happens there? Anything you want me to find out while I'm there tomorrow?