You can thank the Philadelphia Eagles for the NFL draft

Share All sharing options for: You can thank the Philadelphia Eagles for the NFL draft

The NFL released a little history on the origins of the NFL draft. This is a story older Eagles fans may already know, but I think is of interest to those of us not around in 1935...

As the 75th NFL Draft approaches, many NFL fans can recall how the fortunes of their favorite teams were forever altered by a draft.  From the Colts’ selection of Peyton Manning with the first overall selection in 1998 to the Patriots taking a chance on Tom Brady during Round 6 in 2000, the foundation of all great teams begins on draft day.

Few fans, however, remember the role that former NFL commissioner Bert Bell, who conceived the concept of the NFL Draft in 1935, played in elevating the NFL from a secondary sport to the most popular sport in America.

Bell, who owned the Philadelphia Eagles at the time, helped save the foundering league by developing the draft concept to foster competitive balance and strengthen weaker franchises.  The first draft was held in 1936 in Philadelphia at the Ritz Carlton Hotel owned by Bell’s father.  The meeting took place in Bert’s hotel room.

Finish the story after the jump.

In the pre-draft era, teams fought against one another for players coming out of college.  The NFL’s four strongest franchises at the time – the Giants, Bears, Packers and Redskins – dominated.  The other clubs were left struggling just as badly on the field as they were financially.  Some were even on the verge of folding, including 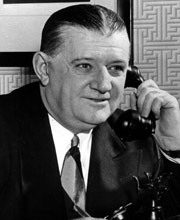 "I made up my mind that this league would never survive unless we had some system whereby each team had an even chance to bid for talent against the others," said Bell, a charter inductee into the Pro Football Hall of Fame in 1963.  The draft is part of a leaguewide commitment to sharing, which remains a key cornerstone of the NFL’s structure and success.

In 1959, Arthur Daley of the New York Times called the draft Bell’s "monument…key to the continuous success of the NFL," but it wasn’t his only banner idea.

Bell bulwarked the NFL image as commissioner from 1946-1959 and set up the league’s long-term television policies, negotiating the league’s first national TV contract.  He also introduced "sudden death" overtime to football and even coined the phrase "on any given Sunday."

Seventy-five years since his first grand idea, Bell’s innovations and vision still have a positive influence on today’s NFL.