With the 25th pick in the 2010 BGN Draft, andyreidswaistline selects...

And so here I stand in the shadow of the most eagerly anticipated Eagles draft pick since taking Moise Fokou... Here goes.

It's no secret that the Ravens would really like a Cornerback here, but Ozzie Newsome is a savvy enough guy to see that none of true college CB's left on the board are worthy of a 1st round selection. To me CB is far and above the biggest team need with current starters: Dominque Foxworth and Chris Carr. The team's remaining needs are DLine, WR, LB and TE.

There are 4 talents here, I could see the Ravens discussing internally but I only expected 3 of them to be here (Cody, Gresham & Odrick). You think Big Ben has problems today? It could be worse as I was seriously considering Terrence Cody.

The prospects of a 700lb, 6.5 ft High and ~6.5 ft Wide wall comprised of Ngata/Cody are frightening. As good as the Ravens defense was last year, they need to find a way to put pressure on the QB, but they aren't going to do it here. 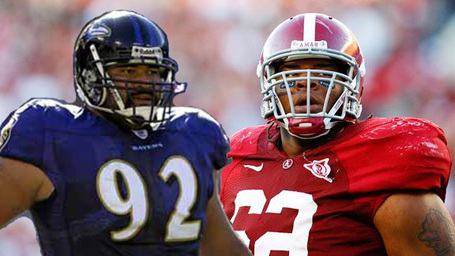 Ozzie Newsome is notorious for his best player available strategy and that is why the Ravens select Texas, Safety - Earl Thomas.

Earl Thomas is a defensive playmaker who will absolutely thrive in the infrastructure that is the Baltimore Ravens Defense. Thomas possesses the size and skill to play either Saftety or Cornerback. Some scouts actually knock him (@ Safety) for playing too physical for his size. This presents no problem at CB, where I foresee him starting for the Ravens in 2010 (sorry Chris Carr). Thomas is also more than capable of unseating Dewan Landry @ SS.

More after the jump..

Perhaps the greatest part about this pick is that Thomas can learn from Ed Reed, potentially becoming his heir apparent. The greatness that is Ed Reed will rub off onto Thomas whether he's playing along side him at corner or safety. It'll actually be interesting to see who hawks more balls in that backfield. It was only a few months ago
that stories broke where Ed Reed was actually considering retirement. Based on what's out there, Reed (31 y.o.) is essentially year to year from this point on. Instead of worrying about it, Harbaugh and Company can make the most of the hand they're dealt.

Earl Thomas can make an immediate impact with the Baltimore Ravens in 2010. Longer term, his presence will soften the blow that will be Ed Reed.

In some areas, the Raven has been so successful that is considered a pest. It's not hard to picture Reed and Thomas pestering the AFC North like birds of prey for the foreseeable future.

Next on the clock will be DeSean10 with the Arizona Cardinals.