The Linc - What were they saying about the Redskins this offseason?

Share All sharing options for: The Linc - What were they saying about the Redskins this offseason? 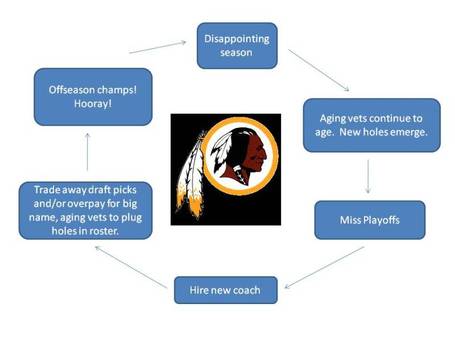 Special impromptu edition of The Linc at BGN today, with the announcement that Donovan McNabb has been benched in favor of the great Rex Grossman.  Let's take a trip back to the offseason and see what some of the pundits were saying in the wake of the Eagles trading McNabb (gasp!) within the division, shall we?

Redskins a Co-Favorite in the NFC East - John Clayton, ESPN

"With the play-calling of Mike Shanahan and the experience and arm of McNabb, the Redskins should easily reach 22 points and game and most likely 24. In addition to McNabb, Washington has added halfbacks Larry Johnson and Willie Parker and offensive lineman Artis Hicks this offseason."

Yes, he actually wrote that.

Redskins among most improved teams for 2010 - Vic Carucci, nfl.com

with McNabb, they should have the firepower to hold their own with the Dallas Cowboys and New York Giants.

Hold their own with the Cowboys and Giants?  What about the Eagles?

Dan Snyder says he can now "sleep at night."

The same goes for every Washington Redskins fan thanks to the dream team of Mike Shanahan and Bruce Allen.

Is it a little self gratuitous and petty to link to my own piece from back in July to say "Seeeee?  Seeeeeeeeee?"  Most definitely.  Don't care.  I wasted an entire day at work this summer writing this thing, and now I'm gonna get my money's worth.