Dimitri Patterson and Kurt Coleman weren't the only inexperienced Eagles defenders that faced enormous tests yesterday against certain first ballot Hall of Famer Peyton Manning.  Rookie linebacker Keenan Clayton also saw some action in pass defense.  Back in training camp, Clayton really stood out to me as a player that was constantly around the football.  He also made his share of big plays in the preseason.  He's an interesting player in that he was both a safety and a linebacker during his college career in Oklahoma, and has excellent athleticism.  Yesterday was the first game this season he did not appear on the inactive list.

So I watched with great interest when I happened to notice from the press box that he trotted onto the field during a key 3rd and 10 play, when Sean McDermott dialed up an interesting look.  Note the picture below:

The red arrow is Keenan Clayton.  The blue arrow is Quintin Mikell. 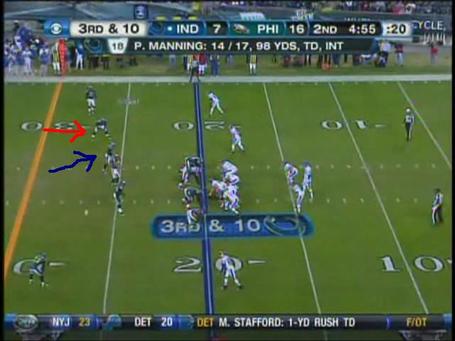 Note that Clayton is lined up almost as a slot corner.  In the video below, watch as Mikell walks up to the line as if to give the impression he is blitzing, while Clayton drops back and gives about a 10-yard cushion.  Manning knows full-well that he wants to test Clayton, who seemingly would be over-matched by wide receiver Austin Collie (17), who is lined up slot right.  At the snap, Manning immediately looks left to draw the defense that way.  Mikell drops into coverage and takes away any underneath route that Collie might run, while Clayton is responsible for over-the-top coverage.  Big responsibility there for Clayton.  Austin runs a seam route, and Manning comes back to the right and fires, but Clayton is there to make the play.  Here's the play:

This is a subtle, yet exotic look here by Sean McDermott, who put his young player in a position to succeed in a scheme that played to one of his strengths, and good job by Clayton for executing.  It'll be interesting to see how the Eagles plan on utilizing Clayton going forward.

Andy Reid talks about Keenan Clayton and how he was used.

On whether LB Keenan Clayton presents a different skill set on defense:

"Sean did a real nice job with Keenan. He had had this idea during the bye week of taking Keenan and using him as a linebacker and a safety, which he did both at [the University of] Oklahoma, so he did that. And he had different looks from different places with Keenan. [He] kind of moved him all around and started him back in the secondary, brought him down to the linebacker position, vice-versa, blitzed him from different spots. So, he had a nice little package in there for Keenan, then Keenan did some good things. You saw him come out of the middle on a couple of coverages there and make some plays. So, you know, he showed us a little something. It didn't seem to be too big for him. He came in and he was excited to play, did a good job on special teams, did a good job during the game."

On whether Clayton will be an option at safety:

"Well, he gives you a little flexibility there [and] you have to look at that. But to say that's exactly what we're going to do, I can't tell you that right now. I'm kind of in that mulling process of going over exactly what to do with that and then we'll see."