To be honest, I wasn't even happy when the game ended. I was still seething over the absolute embarrassment the job done by referee Carl Cheffers and his crew was today. Time and time again we were left scratching our heads and gnashing our teeth as one inexplicable flag after another was thrown against the Eagles. There were some less killer ones like an Eagle getting flagged for a running into the kicker penalty when the Colts punter landed on him... But two others all but gifted the Colts 14 points and nearly the game.

First was the play everyone will be talking about come Monday. Before getting into whether it was right or wrong, let's first say that all reports are that Austin Collie suffered a concussion but was alert and talking at halftime.

You can judge for yourself, but I'll use Matt Mosely's more objective description.

Eagles safety Quintin Mikell was called for unnecessary roughness for hitting a defenseless receiver in the second quarter. Replays showed that Mikell actually led with his shoulder on a hit that left Colts wide receiver Austin Collie on the ground until he was carted to the locker room. Mikell collided with Collie's shoulder on the play. It actually appeared that his helmet collided with Eagles safety Kurt Coleman after he was hit by Mikell.

Phil Simms was clear during the game that he didn't think the hit was worthy of a flag or a fine. What's worse and what no one seems to address is that the play was a fumble. Collie caught the ball, took two steps, got hit and fumbled the ball. So not only should it have not been a penalty, it should have been Eagles ball. Instead, the Colts scored.

The CBS halftime crew was adamant that the hit didn't deserve a flag and that the incident should not warrant a fine. So were the Colts players for that matter. Their quotes after the jump.

Shannon Sharpe: "This is not a personal foul, it’s not."

Bill Cowher on Kurt Coleman: "He should not be fined. Do not fine this young man. This was a clean play. Do not fine him."

"No, it didn’t look like intent. When a player gets hit by two guys, not really simultaneously but one after another, it’s kind of hard as a defensive back to keep your head out of the way. That guy is getting hit towards you, you don’t know where his head is going to be or whatever. They have so many rules out there, it’s tough to be a hitter nowadays, you know what I mean?"

No one thought this worthy of a penalty, let alone a fine. Yet it was flagged and don't be surprised if there's a fine. If you want to be even more annoyed, go read how referee Carl Cheffers stumbles over and contradicts himself attempting to justify the flag. It's a joke. This guy looked earlier this year during the Cowboys Texans game that he didn't belong on an NFL field and today he did nothing to change that perception.

The second embarrassment came on the Colts second to last possession. You can see it at the 2:20 mark here. The Eagles sacked Manning on second down, got an incomplete pass on 3rd and forced a 4th and 18. Manning throws an incompletion and it looks like game over. But no, there's a flag. Trent Cole is called for a 15 yard roughing the passer penalty when his hand brushes, and I mean brushes the back of Peyton Manning's helmet. The Colts get an automatic first down and end up scoring. I get that the NFL doesn't want QBs getting hit in the head. I support that rule... but is there no room for discretion? Is it a penalty if a defenders hand touches the QBs helmet in any way?

Speaking on NFL Live after the game Deion Sanders said of the call "This is crazy, sooner or later you gotta let these guys play."

Rich Eisen said of the refs "It's like they're robots, you see a hand to head and there's no context." 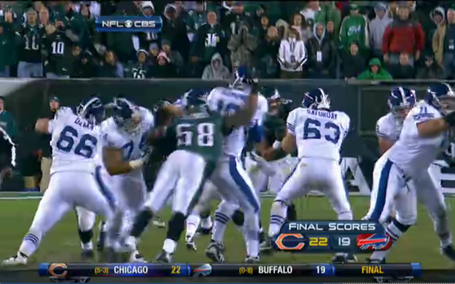 And just for the record, I thought there was one ridiculous call that went against the Colts. The roughing the passer call on Gary Brackett in the second quarter. Vick was out of the pocket and Brackett put what looked to me to be a perfectly acceptable hit on him... but no, the QB was hit and he had thrown the ball so of course they just throw the flag. Of course, a Colts player would blatantly drag Vick down well out of bounds a few plays later and no flag was thrown. To me, the first play was not a penalty and the second was, so the refs got it wrong both times. No shock considering the job they did the rest of the game.