Share All sharing options for: NFC Obituary - Dead After Week 7

Ding dong the witch is dead.  Tony Romo or no Tony Romo, doesn't really matter - This team is done.  Too top heavy, no depth, old OL, disastrous special teams, even the defense has been surprisingly bad, and so on.  They'll almost certainly have a new head coach by next season, and with an OL chock full of guys that will all be 33 years of age by the end of next season, the rebuilding process will take some time, no matter how many talented players they may have.

The 49ers just lost to the previously winless Panthers to drop to 1-6.  I think it's safe to put them away.

Probably a few weeks away before we can kill off the Vikings (2-4), but they look nothing like the team that went 12-4 last year.  They're still only 1.5 games behind the division leading Packers and Bears, but how long can they stay close if Tarvaris Jackson has to play for an extended period of time?

See the rest of the NFC hierarchy after the jump...

At -62, the Cardinals have the worst point differential in the NFC.  The Rams are much, much improved, but they're still nowhere near serious contenders.

They are who we thought they were:

After somehow getting off to a 4-1 start, the Bears have had consecutive home losses to the Seahawks and Redskins.  They're currently tied for the NFC North division lead, but not for long with the way that disaster of an OL is playing.

Should we start taking these guys seriously?

Raheem Morris called the Buccaneers the best team in the NFC.  I'd be excited about the 4-2 start if I were Raheem too, but he should probably tap the breaks on that one a little.  The Seahawks have emerged as the clear-cut favorite to win the God-awful NFC West, and the Redskins keeping finding ways to win extremely ugly.

Reinforcements on the way:

The returns of DeSean Jackson, Jason Peters, and Michael Vick should make the Eagles a legitimate force when they return from their bye this week.

How is this team 5-2?  This team has first-round playoff exit written all over them.

Just kind of waiting for these 2 teams to wake up.  They kind of remind me of the Yakuza guy from the Simpsons, that is just standing there as his henchmen battle Fat Tony and the Italian mafia on the Simpsons' lawn.  When Marge directs Homer to go inside, Homer pleads, "Aww, but Marge, the little one hasn't done anything yet, and you know it's gonna be good!"  That's my fear on the Packers and Saints. 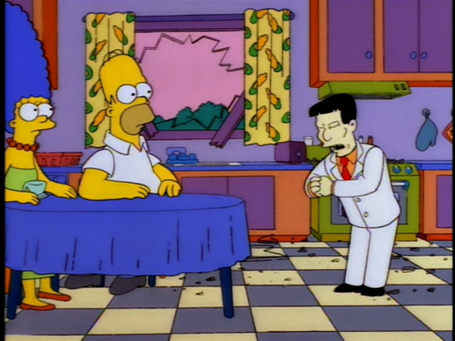 (Sigh) Currently, the best team in the NFC:

In this joke of a conference this year, the Giants stand above the rest... for now.