Project Donolulu - "Getting Donovan to Honolulu!"

Share All sharing options for: Project Donolulu - "Getting Donovan to Honolulu!"

Today, Bleeding Green Nation kicks off a fantastic cause called "Project Donolulu" in which fans of the Philadelphia Eagles have an extraordinarily rare opportunity to take action and improve their favorite team.

- McNabb goes to the Pro Bowl. Take a quick break and vote for him right now, then come back.

Personally, I don't think the Redskins are winning 9 games, so it looks like it's up to us, the Philly fans, to get that 3rd round pick for the Eagles. Even if you believe the Redskins can win 9, better to not leave it to chance. We MUST seize this rare opportunity.

Not to mention, we get to show our appreciation for our great former QB by sending him and his family to Hawaii, and helping him cash in on a bonus for making the Pro Bowl, payable of course... by the Redskins.

So what can you do? Simple - Vote as much as you possibly can for McNabb at nfl.com/probowl/ballot. Voting begins today, and it appears as if there are no limitations on how many times you can vote.

This isn't like that demented Steffi Graf fan that stabbed Monica Seles, or that 12-year old Yankee fan that reached over the wall and turned a double into a homerun during the '96 MLB playoffs. This is a great, wholesome way to be a great fan and help your team without interfering with the rules of the game (or society for that matter).

Vote early and often, and spread the word (facebook, twitter, etc.) - Let's get Donovan to Honolulu! Apologies to Kevin Kolb and Michael Vick - We love you guys, and are voting for you in spirit. Sorry for forcibly having each of you take one for the team. 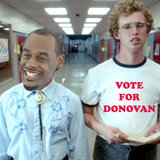