Multiple sources are reporting that Tom Heckert will be named the general manager of the Cleveland Browns on Monday. From NFL.com

Heckert's departure is interesting. It's well known that Heckert has always been interested in a job where he has "final say" on personnel manners. In the Eagles organization, Andy Reid has that responsibility. Heckert has interviewed for several jobs over the past couple years and the Eagles have always seemed happy to give him permission.

The odd thing about this one is that it's hard to say whether the job is much of a step up for Heckert. Mike Holmgren was hired as president of football operations in Cleveland a month or so ago and it's hard to imagine that he won't have a major say in personnel decisions. I'd imagine Heckert will be allowed to do most of what he wants, but if Mike Holmgren liked a certain guy and Heckert liked another... does anyone actually think Holmgren won't have final say?

The fact that the Eagles let Heckert walk for what appears to be little more than a lateral move and the fact that they've let him interview for many jobs over the past 3 years makes you wonder exactly how interested they ever were in keeping him here? In fact, Eagles owner Jeff Lurie even recommended Heckert to the Falcons when he interviewed for their GM opening two yeas ago. At the same time, Heckert's constant wandering eye had to make you wonder how much he really wanted to be here?

More on Heckert and the impact of his departure after the jump.

The tough thing about evaluating Heckert as a GM is that the Eagles front office is so ambiguous about the way they do things. We know that Heckert is the GM but Andy Reid has final say on personnel matters. They claim to have always agreed on every move and draft pick... but can that actually be possible? Plus, there's the wildcard of Joe Banner. We know as team president he has a significant role in the front office but how much say does he have in personnel matters? He does control the purse strings after all...

The Eagles have always appeared to run a "front office by committee." Just a few examples... Andy Reid specifically said that he called Bill Belichick on draft day last year and did the deal for Ellis Hobbs. We know that Joe Banner is the guy who initially contacted the Bills and negotiated the deal for Jason Peters. Check out this story from back then...

"The thing that really caught our eye in here is that he was holding out," Reid said. "He wanted a new contract, so I'm telling our people, 'We better really know this guy.' "

The next step was for Eagles president Joe Banner to contact Bills general manager Russ Brandon. The first contact was made last summer, when Peters was in the midst of a holdout. Banner let Brandon know that if the Bills ever wanted to trade Peters, the Eagles would be interested.

Isn't that contact supposed to be what a GM does? This is what has always confused me about Heckert and the Eagles front office.

In fact, owner Jeff Lurie was the guy who placed the call to Jerry Jones for the draft day trade with the Cowboys that brought Stewart Bradley & Kevin Kolb here. Just as a note, Lurie had no hand in the decision but Andy and co knew he had a relationship with Jerry Jones and thought he'd be a good guy to make the initial contact.

Ironically, Heckert leaving may be the only way for us to really find out what his role truly was in this front office. Honestly, I always wanted to hear Heckert answer this question from the Bobs... 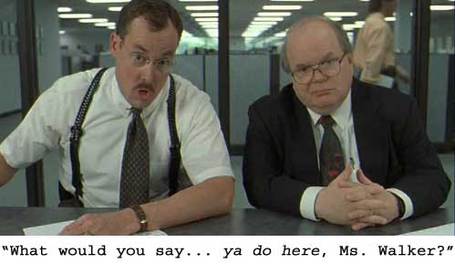 No one should take this to mean that Tom Heckert didn't play a major part in the Eagles successful player procurement process over the past few years. It's just hard to pinpoint exactly how much. Either way, he always seemed like a good guy and we wish him well.