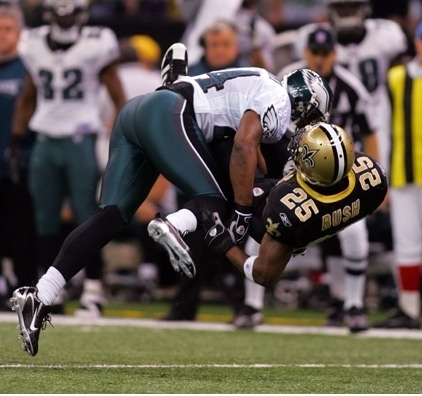 This is the next part in our series of previews of the Eagles 2009 opponents. Joining us for this feature is Dave Schwab, who writes about the Eagles at his site Eagles Lincs.


This weekend is the Eagles' home opener, a game that may or may not feature Donovan McNabb... What Eagles team will take the field is something we'll get into later this week, but what the Saints will feature is something we can talk about right now. Davie does that with his latest preview.

Dave's full analysis after the jump.

This Sunday the 1-0 New Orleans Saints come marching into Lincoln Financial Stadium for a 1:00 P.M. showdown with the 1-0 Eagles. Both teams rolled in their season opener with the Birds beating up on Carolina 38-10 and the Saints outgunning the Lions 45-27. Both teams were able to take advantage of turnovers and convert them into fast points making their opponents pay dearly for their mistakes. Holding onto the ball will be a premium in this game as both teams have already shown they have no problem finding the end zone.

The Saints love the confines of the Superdome where last season they went 6-2, however on the road it was a different story losing six out of eight games. The crowd at the Linc will be counted on to do everything in their power to see that this trend continues. Something tells me that shouldn’t be a problem as I’m sure the 68,000 + fans will be fired up for the Eagles’ home opener.

New Orleans lives and dies with its offense. Last season they led the league in total offense; averaging 410 yards per game, total passing; averaging 311 yards per game, and scoring; averaging 29 points per game. They are led by QB Drew Brees who threw for over 5000 yards last season. In the game against Detroit he turned in a fantasy football dream performance throwing for 358 yards and 6 touchdowns. It will be almost impossible to completely shut him down, but the Eagles’ defense has to be focused on disrupting Brees every chance they get to keep him from getting into any kind of rhythm. His primary target at wide receiver will be WR Devery Henderson, but TE Jeremy Shockey is back and figures to be a factor in the red zone having scored two TD’s against the Lions. On the ground they have RB’s Mike Bell and Reggie Bush. Bell ran for 143 yards on 28 carries against Detroit. I’m sure that defensive coordinator Sean McDermott is already reaching down into the Jim Johnson bag of tricks to come up with a scheme to account for all these weapons.

The big opportunity for the Eagles this Sunday will be going against a very porous Saint’s defense. Behind a rookie QB, Matthew Stafford and very little else, the Lions were able to score 27 points against this team. Granted, it appears that Donovan McNabb will be on the shelf for this one with a cracked rib the Birds should still be able to move the ball against an overmatched New Orleans defensive line. One player that QB Kevin Kolb will want to avoid is SS Darren Sharper. He intercepted Stafford two times both leading to New Orleans’ scores.

One thing to keep in mind is the Saint’s rolled up a ton of yards and points against a team that has now lost 18 straight regular season games. The situation will be a bit different when they have to take their show on the road against a much tougher opponent. While not having McNabb in the lineup puts the Eagles at a distinct disadvantage, this game is going to come down to McDermott’s defensive scheme against the Saints’ high powered offense. Something tells me that JJ will be sending some signals down designed to derail New Orleans’ plans of going 2-0.

Check out more of Dave's insights at Eagles Lincs.