The Linc - Jim Johnson in the hall of fame?

Share All sharing options for: The Linc - Jim Johnson in the hall of fame? 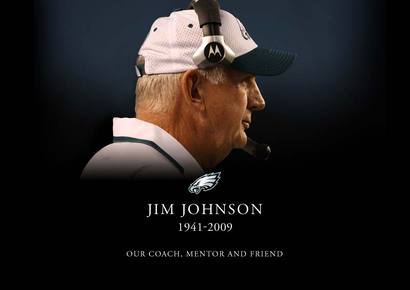 Could Jim Johnson end up in Hall of Fame? - NFC East - ESPN
In case you missed it, ESPN.com's Len Pasquarelli has an excellent column today discussing whether assistant coaches belong in the Pro Football Hall of Fame. There's been a run on head coaches and "contributors" to the game in recent years, but assistants have been all but ignored in the voting process.

A Message for Mays, Chance for Fokou
With veteran Omar Gaither nursing a sore knee, the Eagles may try seventh-round pick Moise Fokou with the starters Thursday against Jacksonville. Gaither will not play, and Fokou briefly spent time as the first-team middle linebacker the last two days.

Didinger’s Top Five Eagles Wide Receivers
Each Tuesday until the start of the regular season, Ray Didinger will give my rankings of the top five players in Eagles history, position by position. Today, the top five wide receivers.

More after the jump including Jon Runyan, Mike Vick, Manning V Rivers, and an old friend gets injured.

Runyan cleared to play, but return to Eagles unlikely | Philadelphia Daily News | 08/26/2009
Jon Runyan is ready to play football again. Now he just needs somebody to offer him a contract.

John Smallwood: Time for Vick to make statement with Eagles | Philadelphia Daily News | 08/26/2009
It would be ridiculous to expect much from Vick, who will be in an NFL game for the first time since Dec. 31, 2006, but it sure would be encouraging for the Eagles if he showed just a hint that he might be worth the agitation that already has taken over - and will continue to take over - since his signing.

So what's Eli thinking this morning? - NFC East - ESPN
Phillips Rivers got a little more guaranteed money than Eli Manning did in his new contract. OMG!