Share All sharing options for: The Linc - We're still talking about Mike Vick 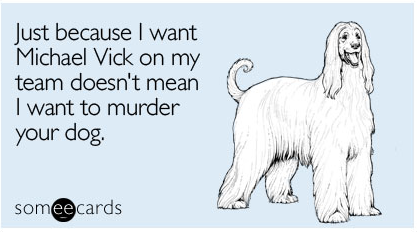 Wing Tips " VICK’S SHARPNESS SURPRISES NEW TEAMMATES
Several Eagles – on offense and defense – were stunned to see that Vick already knew certain routes and patterns and already knew where his receivers belonged – and motioned them there. "He learned it so quickly. I was surprised," said wideout and Delaware State product Shaheer McBride. "I saw him out there directing guys. I was like, ‘OK, wow. That doesn’t look right.’ Is he supposed to be directing guys already?"

EA looking to add Michael Vick to Madden 10 on August 19
"Michael Vick will be added to the Philadelphia Eagles roster in the next Madden NFL 10 roster update, pending NFLPA and NFL approvals. The next roster update will go live approximately on August 19th for Xbox 360 and PS3, with additional platforms to follow shortly thereafter.

Brian Donovan - NewsCast Aside – Vick Deserves To Play - True/Slant
An interesting look at how Philly fans have looked past poor behavior in the past, some might say worse behavior specifically by a recent world champ....

More after the jump, including more local reaction from each side to the Vick signing.

Sports Radio Interviews " Blog Archive " The Fillies In Philly Are Not Happy About The Eagles Signing
These ladies aren't fans of Mike Vick... Whoa.