Jim Johnson passes away at 68

Share All sharing options for: Jim Johnson passes away at 68 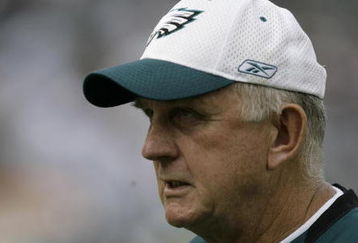 Eagles defensive coordinator Jim Johnson has passed away after a long fight with melanoma cancer.

The Philadelphia Eagles are saddened to announce Jim Johnson has passed away Tuesday afternoon at the age of 68 after a courageous battle with cancer.

A veteran of 22 years as an NFL assistant, Johnson is regarded as one of the top defensive masterminds in National Football League history. Over the last decade, he gained a great deal of praise as the orchestrator of the renowned Eagles defense. His aggressive style kept Philadelphia at or near the top of the NFL in nearly every major defensive category since joining Andy Reid's staff on January 22, 1999.

Johnson is survived by his wife, Vicky, two children, Scott and Michelle, and four grandchildren, Katie, Justin, Brandon, and Jax.

Feel free to leave your thoughts.