This is the next installment in our series of 12 positions in 12 days previewing the upcoming Eagles training camp. Rookie and selected vets report to Lehigh July 26th and each day leading up to that date we will bring you a preview of a different position battle.

The current Eagles corps of TEs started a combined 7 NFL games last year... and they were all from the same guy. In fact those 7 games were the only started by a TE on this Eagles roster at the college or pro level last year.

Should we be worried? Tight Ends are next in our 12 positions in 12 days preview. 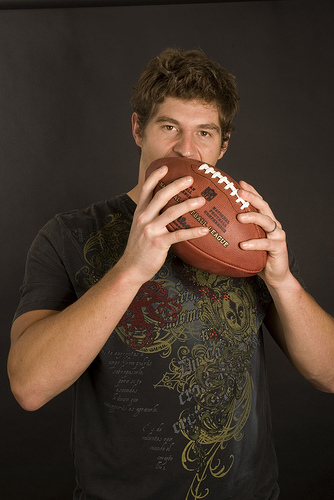 Brent Celek is quite clearly the starter at this position, although probably mostly by default. Fifth round pick Cornelius Ingram isn't likely to mount a serious threat for a starting job just yet and outside of him there's pretty much nothing on the roster that should threaten Celek's place as a starter.

Regular readers of BGN know my feelings on Brent Celek. I think he'd be a nice backup, but is at best an average starter. He's a poor blocker, his hands are suspect, and he's limited athletically. I don't think Celek is a bad player, but I don't see much upsdie to him. Also he wears Calvin Klein briefs.

Putting a positive spin on things... He's still a young player and still developing. He certainly has improved himself from year to year and spoke of his commitment to becoming a better blocker this offseason. Plus, he had a pretty impressive end to last season. Starting with the final annihilation of game against Dallas through the NFC title game(4 games), Celek caught  22 passes for 181 yards and 4 TDs. That's a hell of a stretch that even Celek doubters like myself have to tip our cap to. The question is whether those games represented a turning of the corner for Celek into a really fantastic player, or was it simply the product of a teams laying down(Dallas) or focusing on the Eagles other weapons and allowing Celek to catch a lot of passes(Arizona)? Either way, Celek is the man at TE heading into camp and he'll absolutely every opportunity to prove that he's reached the next level.

Cornelius Ingram was drafted in the 5th round

What to watch for

- I've pretty much already covered what to watch for as far as Celek goes. He will be a starter, he just has to prove that he belongs as a starter in the NFL

- The big thing to watch at TE will be the development of rookie TE Cornelius Ingram. Ingram did not play college football last year after injuring his knee a summer ago, that injury caused a guy that many forecasted as a possible 2nd round pick to fall to the 5th round. A number of draft experts called Ingram a steal in the 5th round.

There's a lot to love about Ingram. He combines good size and a big wingspan(34.5 inches) with great speed and athleticism. He was productive in school catching 7 TDs in 2007 and averaging about 15 yards per catch. He's the kind of TE that should be a mismatch for whoever lines up against. Too big for safeties, too fast for LBs... But there are issues. First and foremost is the fact that he's coming off a torn ACL. The injury happened last August and while Ingram reports that he feels no ill effects there are obvious concerns. It's hard enough to go from 4 year college starter to the NFL, having last played any football in 2007 Ingram is making a big jump to the NFL. Plus, Ingram was used almost exclusively as a reciever in the Florida offense and was rarely ever asked to block. While he certainly seems to have the strength needed to block in the NFL, he's going to have learn schemes and technique from scratch.

- Eugene Bright is a UDFA who played college ball at Purdue. He's a big kid at 6-4, 286lbs and impressed enough during a tryout earlier this summer to get a contract for training camp. Bright was originally recruited to play LB or DE for Purdue, but eventually settled in as a TE. There's so little information out there about Bright that it's hard to know whether he's more of a blocker or a reciever, but his size suggests that he could hopefully develop into the big blocker type the Eagles currently lack at the position.

- Can Matt Schobel hang on to a roster spot for yet another year?