Share All sharing options for: The Linc - Top 5 Eagles OLBs and get ready for McNabb & pancakes 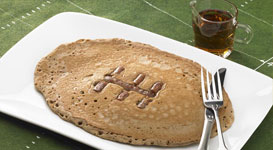 Eagles' Hobbs: 'We're loaded' | Philadelphia Daily News | 06/30/2009
Asked about the Birds' chances of winning it all, Hobbs said, "We're loaded with talent and all we have to do is put it together."

McNabb partners with IHOP | Philadelphia Philly.com | 06/30/2009
McNabb and Cardinals wide receiver Larry Fitzgerald both shot commercials for the campaign last week in L.A. Per Lofton, McNabb is "sacked by an overzealous IHOP waitress." The ads are scheduled to start running in August.

Dead Celebrities and Their NFL Counterparts | Inside the Iggles | A Philadelphia Eagles Blog
It’s been a tough year for celebs thus far in 2009 and it’s only half-way over. I’d like to believe things couldn’t get much worse than what we’ve seen in June, but strange has a way of following the rich and famous. At least this is the last day of the month. Maybe, just maybe, we can escape the day without another big name dropping.