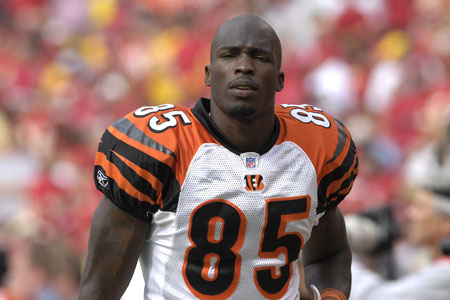 Speaking on NFL Live, ESPN's Michael Smith reported that the Eagles have interest in trading for Bengals WR Chad Johnson. Or is it Chad Ocho Cinco? Whatever is his name is, Smith thinks the Eagles could make a move for him.

"I am hearing there is interest in Chad Johnson," Smith said. "Now there's been some back and forth as to whether or not he is officially on the market. I think everybody in Cincinnati has signed off on moving Chad Johnson except for owner Mike Brown. The Eagles could be in the picture. They have two first-round picks. They need a receiver."

I'd be happy to see Chad Johnson here, I'm not sure that it would take a first round pick as Smith seems to imply here... but it's a move worth making in my opinion. He is, without a doubt, an elite WR in this league and at 31 he's really in his prime. While I've said a few times this offseason that I don't think WR is our biggest need, I have said that playmaker is our biggest need. Chad is undoubtedly a playmaker and we'd be a better team with him.

Speaking to Howard Eskin a few weeks ago, Eagles president Joe Banner said a reason they didn't go after a guy like TJ Houshmandzadeh is that they didn't want to make a move that would prevent them getting an elite WR should one come available.  Well, if this report is true... one is available.

Our pals over at Bengals blog Cincy Jungle have also mentioned the rumors, as well the fact that Chad is likely to be fined by the Bengals yet again for skipping workouts.

According to NFL.com it seems his name is quite literally now Chad Ocho Cinco. Luckily the Eagles currently don't have a player with #85...

Thanks to FrankieFresh for the heads up.