Celek and Demps ready to start

Share All sharing options for: Celek and Demps ready to start 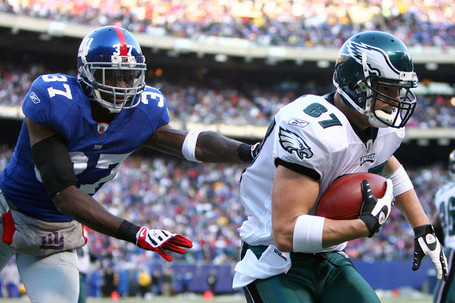 A slew of stories about some of the Eagles younger players hit yesterday after they spoke to the media at the Eagles annual junior football combine. Quintin Demps said he was ready to step into a starting job now that Brian Dawkins has moved on.

"I knew it was coming sooner or later. I didn't think it would be this soon," Demps said yesterday at the third annual youth football "junior combine" hosted by the Eagles at NovaCare. "I know I'm [capable of being] a starter in this league. I'm not looking at it like I'm following him. I'm looking at it like I'm starting my own thing. I'm ready to go. I'm excited."

Demps also said he and Dawkins have exchanged text messages since he left.

The other player to get a few features was controversial TE Brent Celek. Celek isn't personally controversial, in fact I can't think of anyone less controversial... However, whether he's ready to be a starter in the league has been the subject of much debate among Eagles fans.

Overall Celek's regular season numbers were less than impressive and as Tom Heckert remarked his blocking actually regressed. He never really showed during the season that he was ready to be a solid starting TE even after he supplanted LJ Smith as the starter.

However, Celek went on a very impressive run the playoffs with 19 catches and 3 TDs over three games including a 10 reception, 2 TD performance in the NFC title game.

The question is, did he simply have one great game or was his improved play in the playoffs a sign that the light went on for the second year man? Andy Reid expressed confidence in the player, although when doesn't he say this about a player?

"He can be a No. 1 tight end in this league and for us," Eagles coach Andy Reid declared at the NFL owners meetings a couple weeks ago. "I have no problem with that. I expect him to get better in the blocking area, but he's not far off there, and he's very willing."

Celek himself says he understands that his blocking needs to improve.

"I'm trying to get stronger," Celek said. "That's something I need to work on right now. Having surgery last year hindered me in that respect, so I'm working on my strength and my blocking technique. There are things I can improve on in the passing game, too. I can get better at catching the ball and running specific routes."

So what is your level of confidence in both Celek and Demps as starters? Demps is certainly more of an unknown since he was just a rookie and has played less than Celek so far. Personally, I'm cautiously optimistic about Demps. Unlike Celek, he had a pretty poor NFC title game... but played pretty well otherwise. Even more encouraing is that at different times he played corner, free safety, and returned kicks all as a rookie 4th round pick. He even earned a start at safety against the Vikings in the playoffs.

Celek I'm not so sure about. I just a see a guy that's limited athletically and even if he improves from last year, which he should, is still never going to be an above average player in this leauge. He does seem to be a guy that works hard and has a good head on his shoulders, but those two things will only take him so far. If indeed we decide to make this guy the starter, I hope he proves me wrong.