With the 31st pick in the BGN community mock draft the Arizona Cardinals select...

Share All sharing options for: With the 31st pick in the BGN community mock draft the Arizona Cardinals select... 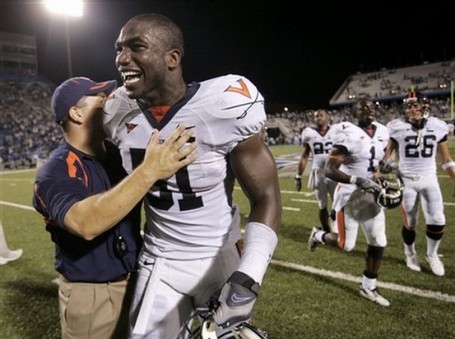 Only yesterday was I made aware of the fact that I would be making the 31st overall selection for the Arizona Cardinals. I also was co-GM for the Detriot Lions (making the 20th overall selection) so I guess I was in a unique position to actually engineer the only draft-day trade in this mock draft. I'm thinking something like Leinart and the 31st overall selection to the Lions for the 20th overall selection (to select Moreno or Clay Matthews) and the 65th overall selection. Works for both teams right? Of course the Cardinals would have to select another QB of the future at some point later in this draft or next year, but who is really sold on Leinart anyway?
Enough with the dreaming...after analyzing the Cardinals depth chart, 3 positions stand out to me as major needs - RB, C and Pass Rushing DE or OLB (in no particular order). I was also considering CB and TE, but the offseason signings of B. McFadden and A. Becht, while not superstars, at least did enough to push the former 3 positions a step above in the need department. Unless Malcolm Jenkins, Vontae Davis or Brandon Pettigrew fell to 31, I don't see them going CB or TE. This pick is also assuming they extend Boldin instead of dealing him for a 1st round pick that would allow more flexibility.

Full analysis and commish take after the jump. Ayydamn and the Pittsburgh Steelers are on the clock!

Now onto the candidates for this pick:
-Donald Brown
-LeSean McCoy
-Alex Mack
-Max Unger
-Michael Johnson
-Clint Sintim
-Larry English
The way I see it, none of these prospects really stand out in regards to selecting using the best player available strategy. While most experts agree that Donald Brown is the best remaining RB, they are mixed on Mack vs. Unger, and there is no consesus between Johnson, Sintim and English.
While Johnson is a freakish physical specimen, garnering comparisons to Julius Peppers, the Cardinals already roster a similar player/project in Calais Campbell, who I watched in person at the "U" for a few years and I believe he can still be a productive starter in the NFL. In addition, they still have LaBoy and Berry and while both have missed extensive time due to injury in the recent past, together they form a solid rotation.
That brings us to Sintim and English, who both fit under the "tweener" label as smaller OLB's who would fit well as the pass rushing OLB in a 3-4 scheme. The Cardinals new defensive coordinator Bill Davis, who has learned under 3-4 coaches Bill Cowher, Dom Capers, Dick LeBeau and Marvin Lewis during his days with the Steelers as a defensive assistant, plans to switch the Cardinals base defense to a 3-4 similar to the one the Steelers use. Last year, now Kansas City Cheifs defensive coordinator Clancy Pendergast used a hybrid scheme, and coach Whisenhunt has been saying they will incorporate both the 4-3 and 3-4 as long as the players can pick up both. The Cardinals are especially week at strongside linebacker where aging veterans Okeafor and Haggans don't provide the pash rush they need. Therefore, it would appear Sintim or English are both perfect fits.
Finally, it comes down to Donald Brown vs. Sintim or English for me. While James has said he wants out, I could envision a scenario where they work something out. In addition, I like the running back by committee approach with Tim Hightower and recently signed Jason Wright. Even if James is released, they can select a RB later in the draft to pair with Hightower and Wright who complement each other well. Therefore, with the 31st overall in the 2009 NFL Draft, the Arizona Cardinals select Clint Sintim, OLB from the University of Virginia.
Overview:

The Good: A big, physically built linebacker with a long wingspan and good power on contact. Played as a 3-4 rush outside linebacker after setting foot on campus and is NFL-ready. Has a good first step off the edge with the length and suddenness to slip blocks. Showcases good footwork and changes directions cleanly. Redirects well to the ball on inside runs.
The Bad: Isn’t real fluid in space and looks very stiff out of the backfield. Is unable to stay with tight ends down the field. At times is slowed too much by fullbacks and running backs in pass protection, a trait not found in the NFL’s top pass rushers.

Commish take - The Cards certainly do need defense and given Sintim's experience with the 3-4 and decent value here he seems like a solid pick.