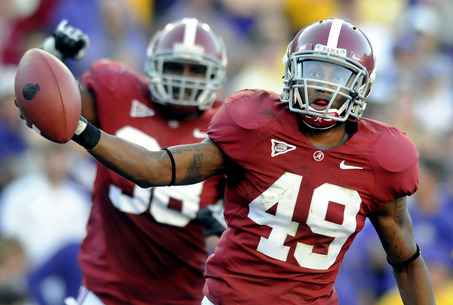 According to PFT, Alabama safety Rashad Johnson will be in Philadelphia today for a private visit with the Eagles. Johnson is a free safety expected go in round 2 or 4.

Strengths: Johnson has become a solid safety prospect after walking on at Alabama. He's done that with hard work, particularly in the film room. That work has turned Johnson into a smart defender who is quick to react, differentiating quickly between pass and run plays. Leader of the Alabama defense on and off the field. Good hands and instincts versus the pass. Johnson had 11 interceptions over his final two seasons. Has played special teams.

Weaknesses: Will struggle to take on and shed blockers. Unlike some free safeties, Johnson isn't the biggest hitter and his presence won't deter receivers from coming over the middle. Much better in zone coverage than man. Had effort lapses from time to time in 2008, particularly against the run. Was arrested in 2008 for disorderly conduct, which could scare some teams off. Limited upside.

Final word: Johnson has worked hard this offseason, reportedly adding 18 pounds of mass. During the year, that was the biggest question about the two-time captain and All American.