With the 30th pick in the BGN community mock draft the Tennessee Titans select...

Share All sharing options for: With the 30th pick in the BGN community mock draft the Tennessee Titans select... 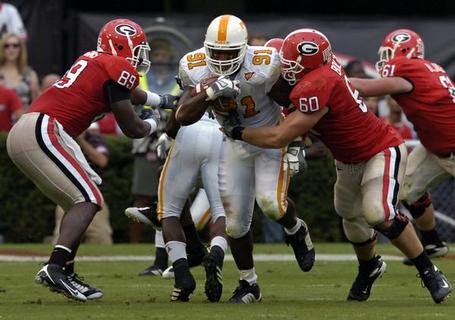 The Titans have needs now, but these are overshadowed by future needs, especially on the defense. Something like 6 of 11 defensive starters' contract are up after this season. In addition to being one of the best players available, Ayers will give the Titans some immediate production and hopefully take over a starting position by the 2010 season.

Last season the Titans won 14 games on the strength of their defense, their ground game and good decision making by Kerry Collins. They did this despite having a weak receiving corps and a 34 year old starting left cornerback. In the off-season they lost possibly the best defensive player in football, Albert Haynesworth. Their starting QB is 36 years old and their back up, Vince Young, is a head case.

The Titans signed WR Nate Washington and DT Jovan Haye in the off-season, but I still see these positions as needs. Replacing aging CB Nick Harper and finding a long term answer at QB are also concerns.

Even though it's not optimal, their receiving corps has improved from last year. Their secondary and quarterbacks are unchanged and I'm not ready to give up on Young. I think the most difficult thing the Titans will need to overcome to be successful this season is the loss of Albert Haynesworth. Drafting Ayers provides some short term relief by giving them a quality player to rotate in on the defensive line now and the long term freedom to be stingier about which veterans they try to retain next season.

Come draft day, I think the Titans would be thrilled if Ayers was available to them at 30. If not, I think it's likely they will trade down rather than over-reaching for a CB or WR.

Commish take after the jump. Hratner and the Arizona Cardinals are on the clock.

Commish take - The Titans could certainly opt to take local guy and all around good value at the spot Robert Ayers. They do seem to have future needs at DE and possibly DT(which Ayers could possibly swing to at times) on the horizon.

The Titans have met privately with WR Hakeen Nicks, so he's a possibility as well.