With the 29th pick in the BGN mock draft the New York Giants select...

Share All sharing options for: With the 29th pick in the BGN mock draft the New York Giants select... 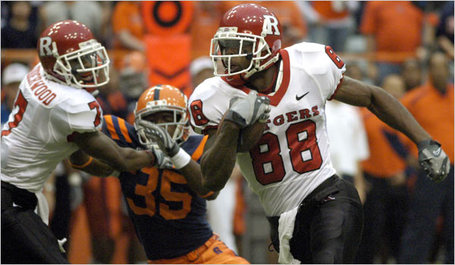 General Manager Jerry Reese and the Giants have added some pieces this off season but no matter what happens, everything goes back to what happened November 30th at the nightclub Latin Quarter. For those living in Siberia the last four months, Giants #1 receiver and $35 million dollar man accidentally shot himself with an unlicensed Glock in his sweatpants at a New York City nightclub. About 20 minutes ago, the Giants decided to release Burress. The move could signal a trade for Braylon Edwards, Anquan Boldin, Ocho Cinco, or a high pick to get Crabtree may already be in the works, but I will ignore that when making my prediction. I will assume the Giants just want to move on and not have their season held hostage by Plax.

Full analysis plus commish take after the jump. Michaluk and the Tennesse Titans are on the clock.

Strong Side Linebacker: The Giants signed Michael Boley and Antonio Pierce, though on the decline, is still a better than average LB (though we all remember what Westbrook did to him last year). Last year Giants’ OLBs had a total of one sack. The team has some young players at the position, but the Giants’ could draft disruptive linebacker that can get to the quarterback and perhaps be a long-term replacement for Pierce.

Offensive Tackle: The Giants win most of the battles on the lines. Last year’s group was good, but not great. Left tackle David Diehl should be moved to the right side and be replaced by a more dominating player. The line in general could also use more depth.

Running Back: Derrick Ward is gone. Ahmad Bradshaw is solid backup but considering Brandon Jacobs has missed a total of 8 games in the last two years, another RB could make sense.

Wide Receiver: Besides the soap opera with Plax, the team lost Amani Toomer. Steve Smith and Dominic Hixon made plays last year, but the Giants cannot feel good about those two being their starting WRs.

The Giants tend not to draft LBs in early rounds and I don’t see this year being an exception. James Laurinaitis probably could be had in the second round (where the Giants have two picks). The team might hope with today’s news that Brian Cushing and Clay Matthews both testing positive for steroids, at least one will slide to them in the second round as well.

Anuj picked Beatty, who I really like, making sure there are no potential tackles left with a first round grade. Beanie Wells and LeSean McCoy could be considered, but solid RBs can always be drafted in later rounds, and the Giants at the end will not be able to get away from their need at WR. Kenny Britt (6-4, 210, 4.47) and Hakeem Nicks (6-1, 226, 4.49) are the top two WRs left, and both would make great additions to the team. Nicks is a consistent player with great hands and runs smooth routes. Britt is a big play receiver who is not afraid to go over the middle. These guys have a lot of similarities but Britt, because of his combination of height and speed, will help the team and its fans forget about Burress and be the pick. He will be a red zone threat and make plays downfield. Even when on the field with Hixon and Smith, Britt is a great slot receiver who likes contact. In addition, Britt had a better proday than Nicks, Britt will not even be 21 when the Giants begin their season, and attended Rutgers, which is about a 45 minute trade ride from the city.

With a great deal of pain because I like the player, the Giants with the 29th pick will select Kenny Britt.

Commish take - Has there ever been a more consensus pick than the Giants taking a WR with this pick? In fact, it's so widely accepted it makes me suspicious... But the fact is that the Giants have been working out most of the top WRs and their need for a top wideout was made pretty obvious in their defeat against us in the playoffs. They simply aren't the same team without Plaxico Burress.

Kenny Britt would give the Giants the big body at WR they now lack with Burress gone. Plus, he only has a short ride up the turnpike from the Rutgers campus in New Brunswick!