With the 28th pick in the BGN community mock draft the Philadelphia Eagles select...

Share All sharing options for: With the 28th pick in the BGN community mock draft the Philadelphia Eagles select... 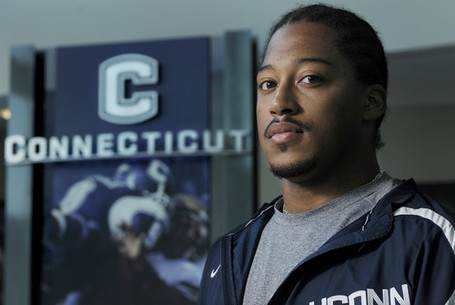 I make this pick because the Eagles draft the best player on the board. For them, the two best were Beatty, and his fellow UConn teammate, Darrius Butler. We already have Jack I. who could develop into our next starter, but what pushed me away from drafting Butler was the names after him. Alphonso Smith and D.J Moore will most likely be available when the Eagles name rolls around again in the second. If Smith is available, watch the Eagles jump on him. It is the same with receivers and tight ends. There are solid prospects available late that the Eagles will be able to pick up. What really gets me about Beatty, and why I believe that he is the best player on the board, is that he has yet to peak. There is still so much raw talent in him that has to be molded. Beatty can immediately come in and back up the ROT spot of Stacy Andrews, and when the staff feels he is ready, move him over to LOT. Another reason for this pick is according to the depth chart on PE.com, the LOT is backed by Winston Justice, and the ROT is backed back Jon Runyan, who is still a FA. This is our most glaring need and Beatty has the skills to step in and be an assist right from the start, with still loads of potential and upside to spare.

Complete analysis and commish take after the jump. Royboy and the NY Giants are on the clock.

The Philadelphia Eagles had three major needs (four, according to some) entering the 2009 NFL Draft. With the loss if Correll Buckhalter, the Eagles lost the main depth for star running back Brian Westbrook. With Westbrook already suffering from injuries on an almost yearly basis, the Eagles had to address the major need of running back in this draft. Foos already answered this need with the choice of Knowshon Moreno, the stud running back out of Georgia. Now, the remaining needs left for the Eagles were Offensive Lineman, Tight End, and maybe, according to many critics, a Wide Receiver. Foos feels that we might aim for DE or CB in the pick. From the two, I find CB more plausible. We already have Trent Cole locked in at RDE, and we have yet to see what Abiamiri has to offer us, so this might be his year. According to Jim Johnson, this kid has a lot to give us, so DE for me is out of our picture. We do have a need at CB. While we are locked in with Asante Samuel and Sheldon Brown, with Joselio Hanson at Nickel, our need now is not urgent. But, age is catching up with Brown, so a long term situation could be address if a solid prospect is available. Foos as already addressed why we need the positions we need, so I can head straight in to the prospects.

Here are the players left whom I feel will be looked at in the Eagles War Room.

From the two receivers that will be on the Eagles draft board high, I find Britt the more attractive receiver. First, what grabs my eyes is his size, 6’ 4’’.This is the kind of receiver we need that will stick out in the red zone. He has bulk and a long reach, but does not have that second burner for the YAC. Britt has excellent hands and runs solid routes, making his a great possessions receiver. The exact kind we need to compliment Jackson as our burner. He has the ability to break tackles and is a great blocker. His main negative is probably his lack of killer speed. Overall, Britt would be a solid pick at WR. He is a good receiver that is also a deep threat if needed. He can also play the screen. Scouts believe he will thrive in the West Coast. Despite his skills, many mocks do not have him going in the first.

Has solid explosiveness off the line, which helps him get separation from defenders. He stretches out to receive the ball, giving opponents more length to cover. Solid in slants and he has the vertical to go after the jump ball. Frequently bails out quarterback with his ability to sense QB under pressure and come back. Yet, he is not a deep threat and not a solid YAC. Also, maybe has some attitude issue. He will definitely be around in the second, maybe even late. Does has limited upside.

Beatty saw his stock rise rapidly in his last year at college. He is the last OT left to be selected in the first. He is extremely athletic for his size and bulk. Has solid agility and can break his stance quickly. Scouts find that he has strong upper body strength, vital for pancaking defenders. Solid lateral quickness for pass defense, and has played the LOT spot splendidly. He has continuously grown in his four years at UConn. Many scouts and anaylsists say that he has just scratched the surface for his potential. But, since he has much potential, he is still a work in progress and has some flaws. He does seem to lose his feeting if the play is drawn out. Some say he could be a one year wonder since his stock rose so quickly in his senior year. Not much is known about him in the big game. Overall, Beatty is one of the elite blockers in the east and could be the long term answer the Eagles need at OT. There is some risk that he is a one season wonder. He has continuously gotten better and better and this could be the player the Eagles need to provide an anchor on the line.

This player is really a stretch for the Eagles to pick at the first. He will definitely be around in the second, maybe even the third. This guy is smart, which could be an upside to reading defenses. This guy has reach, but does not back it up with speed. He is able to knock down his blocker and continue to move down field. Very quick on his feet and can shift at moment’s notice. A little more is needed to tweak his technique or he would be much higher in this draft. If the Eagles do not go OT in the first, look for them to pick Meredith up

TE – None of these guys are worth a first round pick, so I am simply mentioning the names that will be on the draft board for the Eagles

Good height for his position. He has a strong athletic build, helping him with physical matchups with receivers. He works well in the zone package, which will be good for Jim Johnson if Johnson is bringing an extra man to blitz and needs Butler to play coverage. Has a solid vertical and showed the ability to out jump receivers to the ball. He makes good use of his hands, great for interceptions and PDs. Zeros in quickly on his man and hits with shoulder (like Sheldon Brown) to force fumbles. Sometimes can be beat at the line, and hips could be an issue for rotating. Bigger receivers have been known to push him around, but he is able to get physical back. This could be a solid pick for the long term approach. Bulter would thrive under Johnson and would have time to develop under Asante Samuel and Sheldon Brown. Many have him considered to be the next Asante Samuel and some have him going before Davis and Jenkins due to his pure build as a cornerback. This would be a smart, long term pick if available.

Other Cornerbacks worth mention, but will be available in second round or third:

With the 28th pick of the 2009 NFL Draft, The Philadelphia Eagles select….

Commish take - Beatty is good value down here at #28. Some drafts have Beatty going in the late teens or high twenties as the 3rd or 4th OT off the board. Others have him right about here. There's no doubt that OT is a need for the Eagles... Whether that need is best filled by a draft pick or by a guy already on the roster is where the debate is. I'll say the same thing about this pick as a I said about the possibility of acquiring Jason Peters. I think an offensive line with Herremans or Andrews at LT and McGlynn/Gilles/Cole at guard would do a nice a job.... but a line with with ou two guards staying where they are and a good LT being brought would probably be better. So if Beatty is that guy then I think this is a great pick.

Plus, since we've already got our RB and there's a number of interesting TE prospects in the 3rd and 4th rounds... OT isn't a bad position to go. Let's be honest with ourselves, we're all dreaming of RBs, & WRs, and TEs... skill position guys as our picks... but it's Andy Reid making these selections. Anuj made the pick I believe Andy would make.