Share All sharing options for: With the 159th overall pick the Eagles select OT Fenuki Tupou 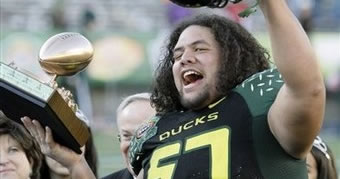 With the 23rd pick in the fifth round the Eagles select OT Fenuki Tupou from Oregon.

Strengths: An incredibly large offensive linemen. Weight equally spread throughout his frame. Keeps a good base. Does a good job on pulls moving laterally and attacking a moving target. Solid quickness off the snap. Generally doesn’t get beat immediately. Good drive blocker. Plays like a guard. Seals off opponents when he can stay in line.

Weaknesses: Due to Oregon’s system of rolling out on passes, Tupou’s pass blocking probably looks better than it really is. Inconsistent in keeping his feet on the ground. Will pick up and step instead of shuffling. Adept cut blocker. Struggles to pick up blitzes, particularly to the inside. Tupou is packed with strength and power, but he doesn’t seem to always utilize it correctly. Instead of mauling opponents, he lets them control him. Doesn’t sustain his blocks very long. Appears to be in below-average condition. Nearly gave up football in high school when his team struggled. Struggles at times with blitz awareness. Only played two seasons of big-league college football after attending a community college.

Final word: Due to his play in 2007 spring practice, Oregon coaches pushed Max Unger to center to get Tupou into the lineup at left tackle. He played every game since with good results. Tupou is a large tackle who can handle the physical punishment at the line of scrimmage. However, he did play is a wide open spread offense and needs to work on the fundamentals. Likely a guard or right tackle. Will be a 24-year-old rookie.