Live from the NFL draft

Share All sharing options for: Live from the NFL draft

Congratulations everyone, you've officially survived the offseason so far and have made it to draft day! By the end of this weekend we should have a pretty good idea of what the Eagles team will look like come opening day and we'll have a clearer picture of the direction this franchise is headed. Over the next 36 hours we may see the great Eagle(or Eagles) selected or maybe we'll see the next total bust. The Eagles could trade up, trade down, or trade for a veterant player... That's why the draft is so great. This is where teams are built, this is where the foundations for a superbowl winner are made, and it's the one event that really seperates the good teams from the rest.

For anyone that doesn't know, I have been officially credentialed by the NFL to cover the draft live from Radio City Music Hall. I'm hopping on a train to New York this morning to meet up with my colleagues at Mile High Report and Stampede Blue. We'll talk some draft over breakfast and probably record our conversation for a podcast that will be released on Mocking the Draft. At 1pm, MHR and I will head to Radio City to pick up our credentials and head in. The draft doesn't actually start until 4, but hopefully we'll have the opportunity to talk with lots of NFL insiders, rookies, and more. We'll also do our best to dig up some rumors or nuggets about might happen later in the day.

I'll obviously be updating the blog as often as possible, but you can also follow my adventures over at the official BGN twitter. I'll probably be updating that with all the celebrity sightings and other little thoughts.

Feel free to use this an open thread for the morning of the draft.

[Note by JasonB, 04/25/09 1:42 PM EDT ] We have arrived. We're seated at the foot of the ESPN broadcast stage in the shadow of Keyshawn Johnson and just a few rows from where the commish will be announcing the selections. 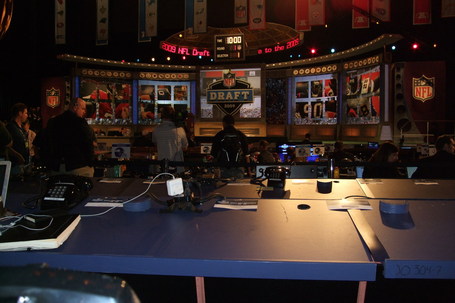