The worst idea ever

Share All sharing options for: The worst idea ever 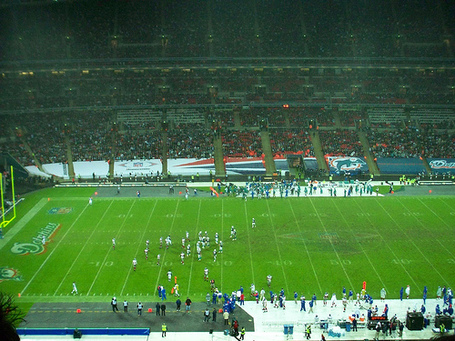 The superbowl held in London.

While commissioner Roger Goodell has previously admitted an interest in bringing the game to London, this is the first confirmation of discussions.

"We've spoken on what it would take to host and for us to bring it over," said events vice-president Frank Supovitz.

"The city has all the facilities needed, and in great quantity."

Supovitz was talking in New York City where the NFL Draft will take place this weekend.

"We have had very substantive conversations with the city of London. We've got to the point of exploring the bid document," he added.

The BBC article goes on to quote several other NFL officials who all hyped the idea as well.

I get the idea that the NFL wants the entire world to love them. I'm sure they have this fantasy that it will become as big in Europe as it is here... I have no problem with them playing the odd game here or there outside of the US.

But the championship game? The championship of this country's largest sport played in another country? At what point does tradition trump a simple cash grab? This is our sport. The team's bear the names of our cities. The superbowl should remain here.

You'd never see the final of the UEFA champions league being played in the US and the Superbowl should not be played in Europe.